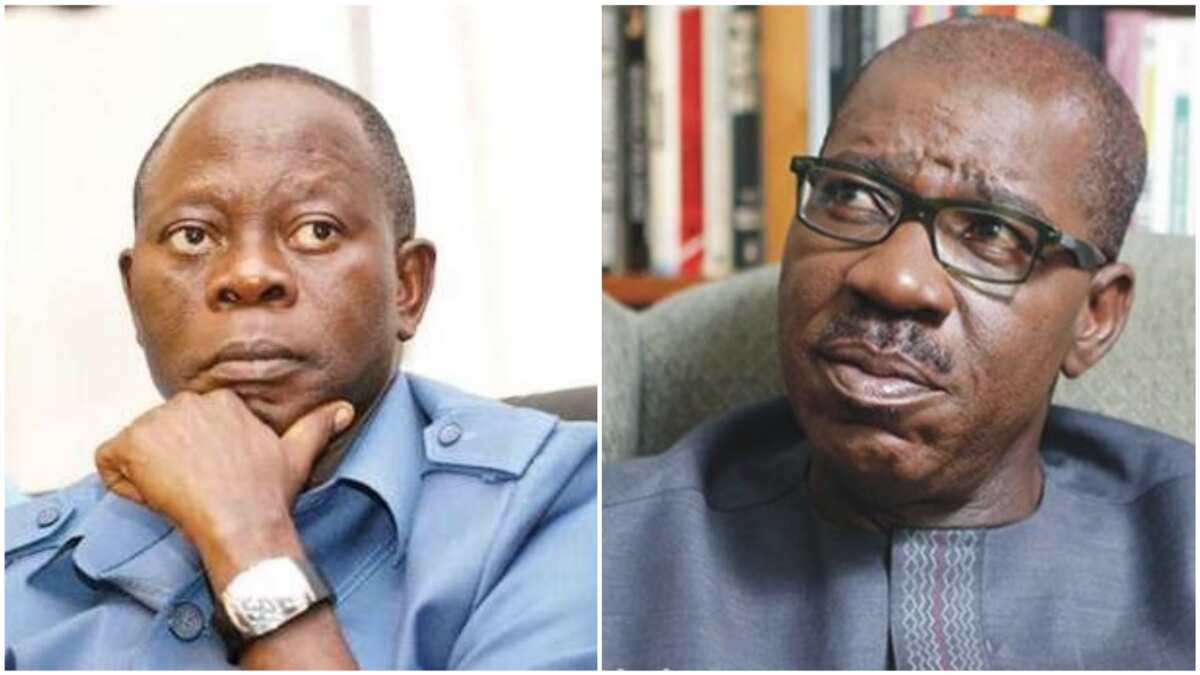 In what looks like a swipe at his predecessor Adams Oshiomhole, Edo governor Godwin Obaseki said the crisis rocking the state House of Assembly was because he refused to share public funds with some self-styled godfathers.

The governor, addressing a Benin delegation that visited his Abuja home, said the crisis that trailed the inauguration of the state assembly was largely based on the fact that some people, who claimed to have brought him to power wanted to administer the state government affairs.

He however vowed that Edo will not be allowed to ''be a pawn in anybody’s political chess game,'' Sahara reporters reports.

READ ALSO: The children of poor we neglected may come back to consume us - Shettima

Obaseki said: “The only thing they have said is that I refused to share money; I am not taking care of the people who brought me into office.

“I said 300,000 Edo people voted for me to be governor; if I do for the people, everybody will benefit.”

Legit.ng recalls that it has been a fight of political popularity between Obaseki and his predecessor who is also the national chairman of All Progressive Congress (APC), Adams Oshiomhole.

Taking a frightening face of fresh crisis for the ruling party in the state, a lesser number of the state lawmakers loyal to the sitting government elected a speaker against the wish of the APC national chairman.

Edo has since been plunged into fierce altercation between the two factions, with House of Representatives threatening to take over the assembly.

Although the governor had admitted that there was no conflict of interest between the duo, in contrary reports, Obaseki berated his predecessor and alleged that the APC chairman is not interested in peace of the state.

He also vowed that the state will not be left in the hands of selfish political gladiators marauding themselves as ''father'' in the state in a bid to create confusion.

''Is it not ironic that in a state where we have one party ruling, and that has all the 24 seats in the House of Assembly, we have this kind of a crisis?

“At the centre, we have our own person who is supposed to superintend (over) this (matter). So, if your children are fighting and you cannot come and settle them, then what authority do you have to even be a father?

“I will not allow Edo State to be a pawn in anybody’s political chess game. For me, I keep asking the question, what have I done wrong? What is my offence that they want to now get people to come and create confusion in the state?” He said.

Meanwhile, Legit.ng had also reported that the government of Edo state had revealed that it would probe contracts awarded for construction of structures and supply of equipment to Benin Central Hospital under the administration of Adams Oshiomhole.

The probe was confirmed by Cruise Osage, Special Adviser to Edo Governor on Media and Communication Strategy in a statement he issued on Sunday, July 7 in Benin.

How Nigeria's democracy has fared in the last 20 years - Jega, Ezekwesili - on Legit TV

Unbelievable: 17 day-old Baby Girl Recovers After Being Infected With Coronavirus Without Taking Any Medication (Photo)