Following increased xenophobic attacks by South Africans against Nigerians in their country, President Muhammadu Buhari has sent a message of warning to the government of the African nation.

The message of President Buhari to the South African government was revealed by his special assistant on new media, Bashir Ahmad, after a release of the report by a special envoy sent to Pretoria.

In his message to Cyril Ramaphosa, the president called on the government to take decisive measures in ending violence against Nigerians in its country, adding that the trend could damage the reputation of the nation.

Moreover, the president ordered the immediate voluntary evacuation of all Nigerians who are willing to return home.

Earlier, Legit.ng reported that at least 400 Nigerians in South Africa had indicated interest to return to home following the latest xenophobic attacks in their host country.

The disclosure was said to have been made by the Nigerian mission in South Africa adding that these set of people have registered to be evacuated from the troubled country. 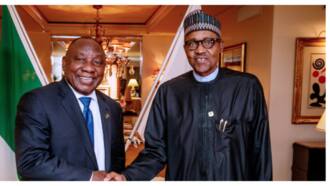 Nigeria’s consul general in Johannesburg, Godwin Adama, made this known on Sunday, September 8.

The report said Adama noted that Air Peace had offered to airlift those willing to return home and, according to him, the first batch of Nigerians, who have shown interest, will be repatriated on Wednesday, September 11.

Serie A: Sarri comments on Cristiano Ronaldo’s performance after Juventus’ 3-1 win over Genoa 0

Nigerian newspapers: 10 things you need to know this Wednesday morning 0

Police order investigation into murder of man in Enugu community 0