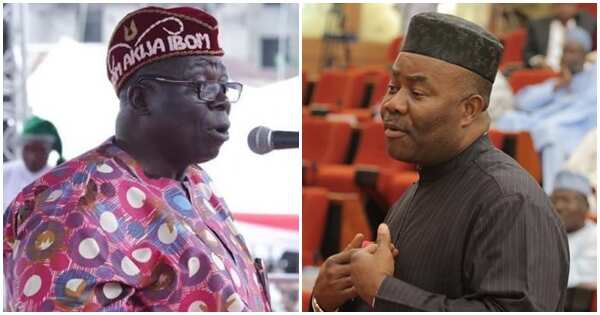 - The minister of Niger Delta Affairs has 90 days to win the battle to be senator again, according to the ruling

Minister of Niger Delta Affairs, Senator Godswill Akpabio, has secured a victory in his challenge of the results of the Akwa Ibom North West Senatorial District elections.

Premium Times reports that the ruling was delivered by the appeal court in Calabar, the Cross River state capital today, Saturday, November 9.

The appeal court panel ruled that a fresh election should be carried out in the next 90 days.

This is another senatorial election going into a rerun after appeal court sacked PDP's Dino Melaye of Kogi West.

Legit.ng notes that the national and state house of assembly election tribunal, sitting in Uyo, the Akwa Ibom state capital on Wednesday, September 11 upheld the victory of Ekpenyong over Akpabio as the senator representing Akwa Ibom North West senatorial district.

Meanwhile, Legit.ng also reported on Saturday that Lagos governor, Babajide Sanwo-Olu, was declared the rightful winner of the 2019 governorship election in the state.

The Court of Appeal held that Sanwo-Olu was duly elected in the polls which was held on Saturday, March 9.