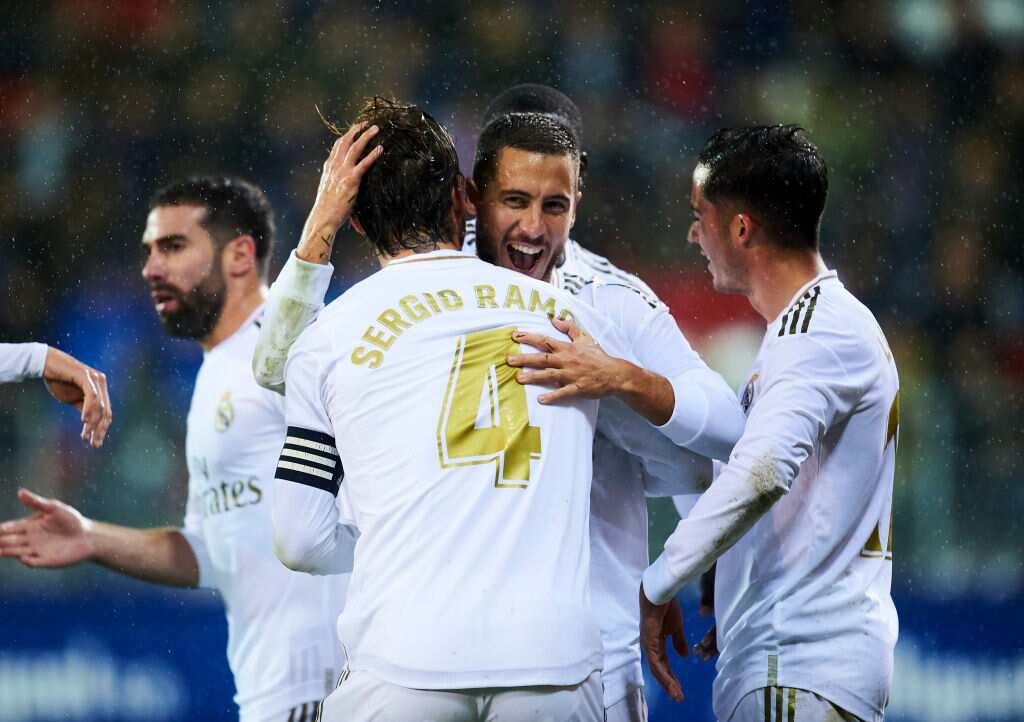 - Two goals from Benzema, one each from Valverde and Ramos sealed the win for the visitors

Real Madrid move to the summit of the La Liga table temporarily following their 4-0 victory over Eibar at the Ipurua Municipal Stadium.

The victory came on the back of their 6-0 demolition of Turkish League side Galatasaray in the UEFA Champions League during the week.

Few days after being held to a goalless draw by Real Betis at the Santiago Bernabeu last weekend as they failed to advantage of Barcelona's defeat last weekend.

Karim Benzema opened scoring for Los Blancos just after 17 minutes of action with a stunning strike as they return to winning ways in the league.

Three minutes later, captain Sergio Ramos doubled the visitors' lead from the penalty spot in the 20th minute to give them a two goal advantage earlier in the game.

Despite leading with a two goals margin, coach Zinedine Zidane did not stop attacking as they continued to mount pressure on their hosts.

And in the 29th minute, the Galacticos were awarded their second penalty of the game - this time, Karim Benzema stepped up to put the ball behind the net as he completed his brace in the game.

Federico Valverde recorded his name on the scores sheet in the 61st minute with a superb strike after connecting with Luka Modric's pass to finally put the game neyond the hosts.

Every other attempts from both sides failed to yield result as Zidane's men recorded their second straight win with massive goal margin.

Madrid will now shift focus to their next home game against Real Sociedad at the Santiago Bernabeu with the aim of maintaining their winning focus.

Legit.ng earlier reported that Nigeria's U23 national team got their U23 Africa Cup of Nations championship off to a losing note following their 1-0 defeat to Ivory Coast Al Salam Stadium in Cairo.

Silas Gnaka scored the only goal that handed Soualiho Haidara's side their first victory at the tournament through a spot kick in the 71st minute.

Cristian Kouame won the penalty for his team after being tripped by Dream Team defender Olisa Ndah, who was sent off the pitch for picking a second yellow of the game.