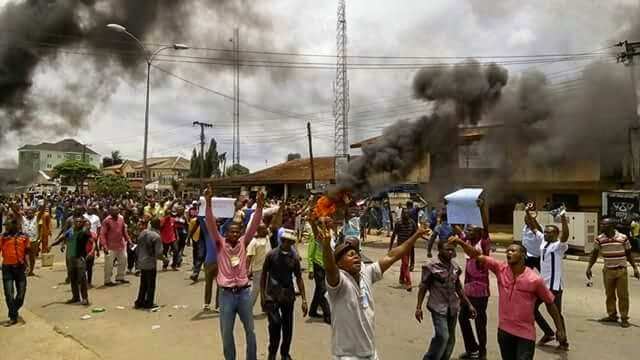 Election violence has begun in Kogi ahead of the governorship election slated by the Independent National Electoral Commission (INEC) for November 16, as some irate youths have razed down a party secretariat.

Legit.ng understands that the hoodlums suspected to be political thugs attacked the secretariat of the Social Democratic Party (SDP) in Lokoja, the capital of the state early on Monday, November 11, burning down the building.

According to The Nation, the affected secretariat of the party is located close to the Lokoja local government secretariat.

It was learnt that the attack was the second in 24 hours as suspected thugs earlier vandalised the doors and windows of the secretariat.

Also vandalised were banners, posters and some campaign materials in the earlier attack.

The attack is coming days after the party claimed that there were plans against the convoy of its governorship candidate, Natasha Akpoti.

Legit.ng earlier reported how the Peoples Democratic Party (PDP) recently alleged that the threats of violence from the All Progressives Congress (APC) would not stop it from overrunning Governor Yahaya Bello and his party in all the senatorial zones of the state, including the Kogi Central in the November 16 governorship election.

The PDP said this in reaction to reported threats by Yahaya Bello and the APC to unleash violence and disrupt the party's campaigns in Kogi Central senatorial zone.

Meanwhile, Governor Nasir El-Rufai of Kaduna state has said he is working hard to ensure Bello's victory at the election.