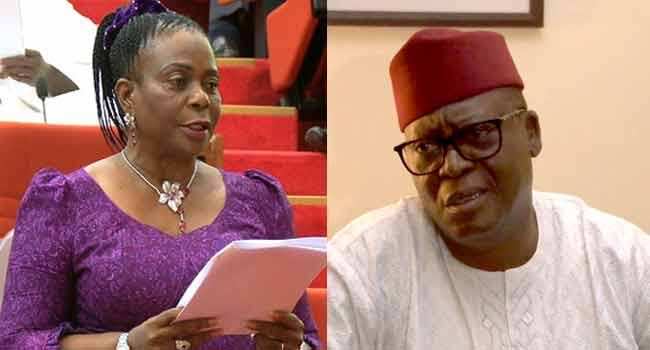 Days after defeating the spokesperson of the Senate, Dayo Adeyeye, former deputy governor of Ekiti state, Biodu Olujimi, has carpeted the Independent National Electoral Commission (INEC) of over the 2019 election.

Olujimi revealed in an interview with Vanguard that she decided to stay away from the activities of the ninth Senate and focus on winning at the appeal court because of how disheartening it would be knowing that she was meant to be there.

Olujimi, who was candidate of the Peoples Democratic Party (PDP) at the 2019 senatorial election, also cautioned INEC against a repeat of its alleged failure in 2019 ahead of the governorship elections in Kogi and Bayelsa states.

“I read a report today whereby 14 House of Representatives seats have been retrieved from one party. That is a sad commentary on the ability of INEC to hold a free and fair election. That should not happen in Kogi and Bayelsa elections,” she said.

She asked INEC to remember that the polls in Bayelsa and Kogi are ways it can redeem its image judging from the 2019 elections.

According to her, the elections should be conducted in a way that candidates who lose would be sure they lost fairly.

“That is all we are asking and that should be made to happen in Kogi and Bayelsa elections to be able to make us forget the ills of the last elections,” she added.

Concerning her future at the Senate, she noted that even though she will be the only PDP member from Ekiti, she would work with the state government in the interest of the people where necessary.

“I am going to work with everybody to bring the dividends of democracy to the people of Ekiti, and that has nothing to do with party politics.

“I will support whatever government needs within the system so that my people can enjoy. It is not about me, it is about the people,” she said.

Legit.ng earlier reported that Governor Kayode Fayemi of Ekiti expressed shock over the Court of Appeal's ruling that sacked Adeyeye of the All Progressives Congress (APC).

This is as the APC described the judgement as travesty of justice and truncation of people's wishes.