The Peoples Democratic Party (PDP) campaign council has alleged that there are some imported thugs in Kogi to cause mayhem in the state ahead of the November governorship election.

The party in a statement sent to journalists on Thursday, November 14 by its spokesman, Austin Okhai, sought the intervention of traditional rulers in the state to nip a potential crisis in the bud.

The state specifically noted that the imported thugs are mostly members of the Odua Peoples Congress (OPC).

The council claimed that the thugs were brought into Kogi from Ekiti state to cause unrest during the election.

Okhai said they are in the state to ensure that the opposition parties did not win in Kogi central and west senatorial districts.

The party, however, appealed to the Department of State Security (DSS) to be weary of the antics of the people that were determined to cause crisis during the election, particularly in the strongholds of the opposition.

“The people of the state have endured the misrule of the Yahaya Bello led administration and are ready to vote him out on Saturday,” he said.

Meanwhile, a group, Kogi Professionals in Kaduna State (KPKS), has berated the federal government for releasing N10billion to the Kogi government 24 hours before the governorship election in the state.

The group in a statement sent to journalists on Wednesday, November 13, expressed deep concerns the action of the federal government. 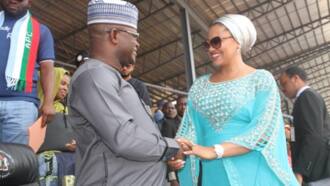 The statement, which was signed by the Engr. Isa Ainoko and Mrs. Mercy Ipinmisho, noted that the federal government has more explaining to do on the timing of its release of such funds just before election day.