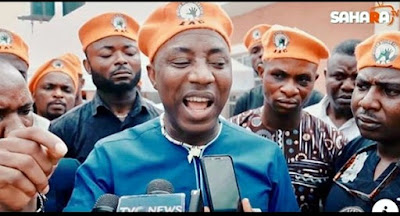 Amnesty International, Nigeria, says the continued detention of Omoyele Sowore and Agba Jalingo is a matter of shame for Nigeria.

In a statement issued on Wednesday, Seun Bakare, the organisation’s programmes manager, said Sowore, convener of the #RevolutionNow movement, Olawale Bakare, an activist, and Jalingo are prisoners of conscience for criticising the government.

While Sowore and Bakare are still in detention despite the court ordering their release, Jalingo, a journalist, is facing trial for criticising Cross River state government.

The human rights organisation alleged that the government has repeatedly targeted activists and journalists in order to stifle dissenting voices.


It asked the federal government to drop charges against the trio and release them.

“We consider Sowore, Jalingo and Bakare to be prisoners of conscience detained solely for exercising their human rights,” the statement read.

“The Nigerian authorities must drop all charges against them and release them immediately and unconditionally.

“Sowore, Jalingo and Bakare’s continued detention is a matter of shame for Nigeria. Their cases show just how far the authorities in Nigeria can go to silence their critics.

“The government of President Muhammadu Buhari needs to stop filing bogus and politically motivated charges against critics, and start listening to what they have to say.

“The flawed charges and sham trials of Sowore, Jalingo and Bakare expose the inadequacies and bizarre manipulation of the Nigerian criminal justice system and an unacceptable contempt for the rule of law and human rights.”