Just in: Oshiomhole secures vote of confidence from Edo senators, Reps as battle with Obaseki lingers

It was a win for Adams Oshiomhole, embattled national chairman of the All Progressives Congress (APC), as he secured a vote of confidence from federal legislators representing various constituencies in Edo state on Thursday, November 21.

Oshiomhole, a former governor of Edo, has been in a running political battle with his successor, Godwin Obaseki with analysts warning that this may result in the APC losing the state in the 2020 governorship election.

The Nation reports that the Edo caucus of the National Assembly passed the vote of confidence shortly after the APC national leadership appointed Governor Abdullahi Ganduje of Kano to head a five-man committee on the crisis.

According to the senators and members of the House of Representatives from Edo, Oshiomhole has been successful as chairman of the APC.

They argued that this was why the party recently won two governorship elections which they described as tough.

Peterson Akpatson, a member of the National Assembly, told journalists at a press conference on Thursday, November 21, that Obaseki and his government had done damage to the state and the APC through their activities. 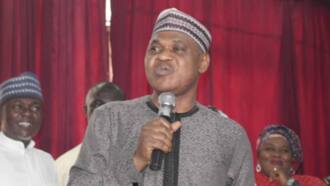 The caucus described the actions of Obaseki as undemocratic and unorthodox just as they warned him to retrace his steps with immediate effect.

They further demanded that Obaseki must issue another proclamation as stipulated in the constitution so that the 24 members of the state Assembly would be formally inaugurated to carry out their duties.

They called on all warring factions in the state to stop forthwith and work towards its growth and development.