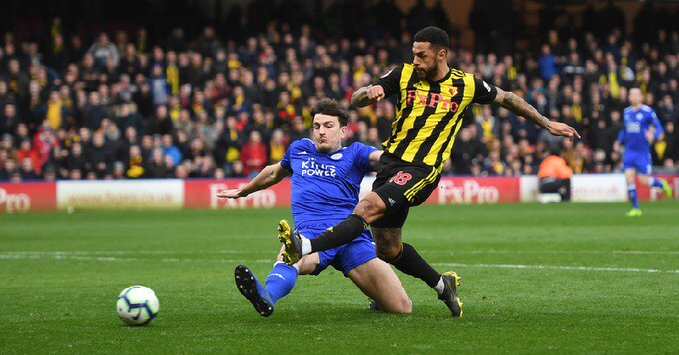 Leicester City vs Watford ended in another thrilling victory for the Foxes as they overpowered their opponents to a vital 2-0 win on Wednesday night, December 2.

Foxes came into the game high-headed having cruised to a narrow 2-1 win over Everton last weekend only to lose out on first half lead as Watford's gave James Vardy-led attacking line a thorough nightmare.

The torrid run continued for Foxes as Watford put in a tough fight against their host.

Vardy was getting ruthless only for the England international to be booked in the 38th minute for simulation.

To make the matter worst, Caglar Soyuncu was also penalalised for foul play less than fives minutes into the first half end.

The second half continued with the game looking destined for stalemate but James Vardy was fouled in the Watford box.

The referee controversially handed Leicester a penalty which the Three Lions star beautifully converted to goal in the 55th minute to give the host a tough lead.

Watford forced Foxes to the end of second half with a threatening defence and subtle attack.

The game looked likely to end 1-0 only for James Maddison to strike in a late minute goal to send the stadium into frenzy.

Leicester continued their impressive run, sitting second on the table with 35 points behind league leader Liverpool.

Meanwhile, Legit.ng had reported that Gernot Rohr, Super Eagles head coach, has missed out on the Confederation of African Football (CAF) five-man list of nominees for best coach of the year award in Africa.

The German tactician guided Nigeria to enviable third place glory at the African Cup of Nation (AFCON) 2019 in Egypt.

A picture of former G40 Kingpins Patrick Zhuwao, Saviour Kasukuwere and Walter Mzembi has gone viral on the in internet.The picture shows the three former

The United States of America gave the opposition MDC 2005 as the deadline to remove ZANU PF or risk being irrelevant. In a decalssified letter

Chelsea manager, Frank Lampard, has named Mateo Kovacic and Fikayo Tomori as the players that will miss his side’s Premier League clash against Watford on