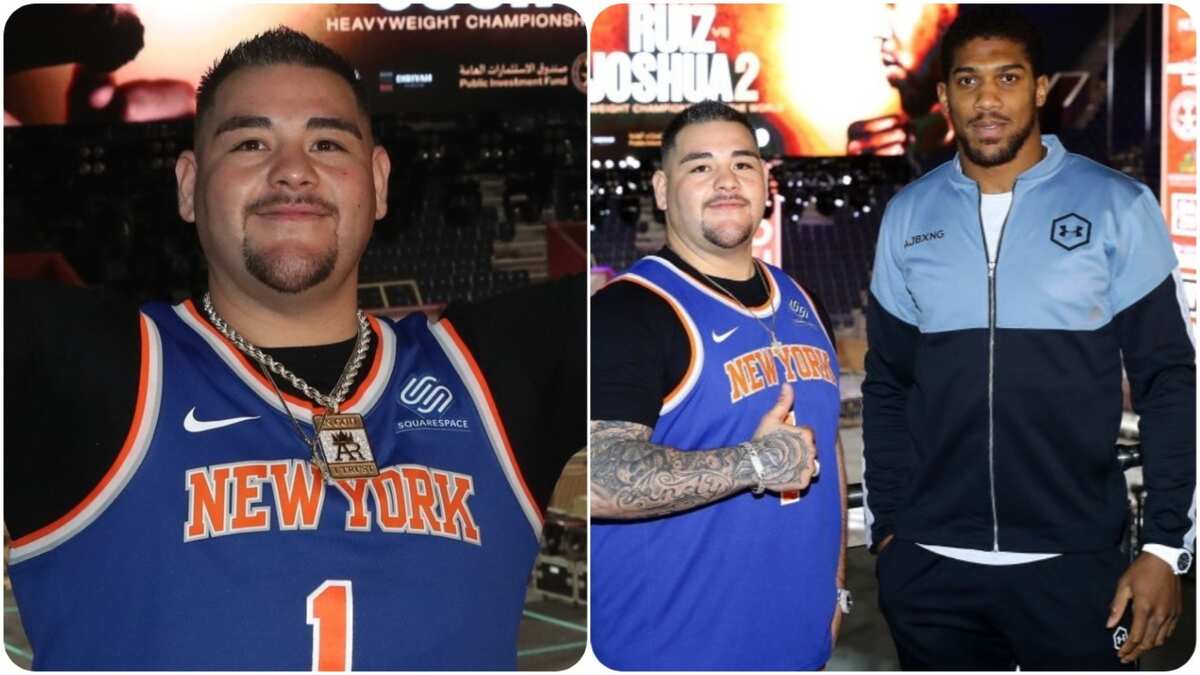 Andy Ruiz is battle-ready to defend the titles he won six months ago when he squares up against Anthony Joshua in Saudi Arabia this weekend.

The Mexican-American fighter caused major boxing upset on June 1 in the United States after downing his opponent at the MGM Arena in the seventh round.

However, with about two days left to their famous rematch, Ruiz sent soft shades to Joshua after appearing in their press conference in a New York Knicks top.

SunSport reports that the boxer wore the same outfit freshly after winning the WBA, IBF, WBO and IBO heavyweight titles earlier in the year.

Both boxers were said to have been presented with the New York Knicks tops before the unexpected happened at the Maddison Square Gardens.

Meanwhile, some fans have noticed Ruiz's message ahead of the second meeting between the two fighters.

Another added: "Andy Ruiz has arrived at the final press conference wearing the New York Knicks top he got the night he beat Anthony Joshua at MSG. Don't think Joshua needs reminding."

And one claimed: "Andy Ruiz is wearing a New York Knicks top just to rub it in..."

The unified champion was thrilled fans spotted his sly reminder of the shock upset win at Madison Square Garden.

He said: "I'm happy people noticed the jersey I wore. "It means a lot to me because that's where I got the first victory on June 1 and that's why I brought it.

“I wore it to remind myself 'I'm the champ'. I won on June 1 and that's exactly what we're going to do on December 7.

"Seeing the jersey reminds him as well. You could call it a mind game but I did it for myself mainly.”

Joshua, who showed off his slim new look at this week's open workout, donned a plain white t-shirt as he sat alongside Eddie Hearn.

Legit.ng earlier reported that former heavyweight champion Anthony Joshua will rake in about $85 million after his bout with Andy Ruiz this weekend.

Apart from the cash prize, he will also hope to reclaim the four belts he lost to Andy Ruiz six months back after the fight.

Both are getting ready for a re-match this weekend in Saudi Arabia - a battle earlier scheduled to hold at Cardiff City.