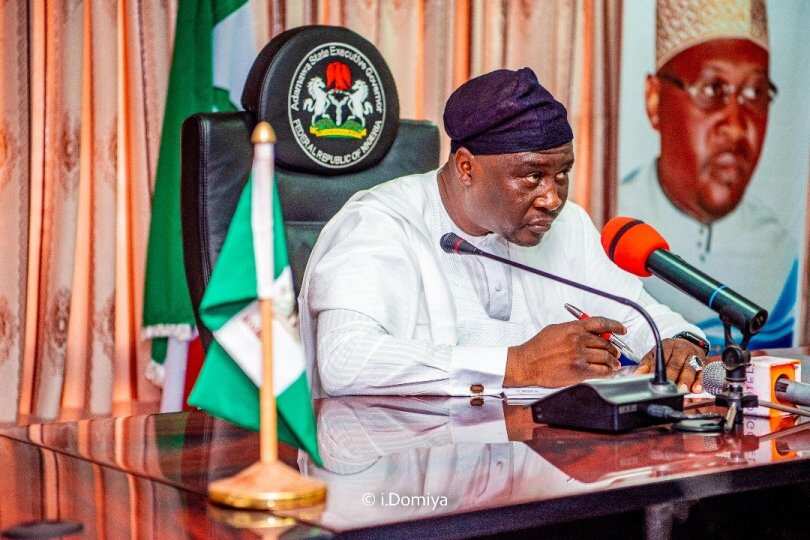 - APC's organising secretary, Ahmed Lawal, says the party is not comfortable with the ruling of the appeal court that favoured Fintiri

- The party, however, explains that it is still waiting for the judgement before it would head to the Supreme Court

The All Progressives Congress (APC) in Adamawa has asked the governor of the state, Ahmadu Fintiri, not to continue in his jubilation as he still has the Supreme Court to contend with over his election victory.

The party said this in reaction to the victory of Fintiri at the appeal court sitting in Yola, Adamawa in a case filed by the APC contesting his victory at the 2019 general election.

Premium Times reports that the judgement of the appeal court in favour of Fintiri was delivered by Ali Gumel.

The report quoted Ahmed Lawal, APC's organising secretary, as saying that the APC was taking further action because it was not comfortable with the ruling of the appeal court.

“We are waiting to receive the judgement for the next line of action. But we will definitely go to the Supreme Court to retrieve our mandate,” Lawal said.

In his own reaction, Governor Fintiri commended the ruling of the appeal court calling it victory for the people of the state.

According to him, the ruling is an affirmation of the people’s mandate freely given to him at the election.

The governor promised that he would spend his four years carrying out activities to develop the state as a means to justify the confidence the people have in him.

Legit.ng earlier reported how the APC was defeated by the affirmation of Governor Fintiri as the winner of the governorship election.

The appeal court upheld the earlier judegment delivered by the governorship election tribunal in favour of Fintiri.

Service Chiefs in the eye of Boko Haram storm 0

Service Chiefs in the eye of Boko Haram storm

Kindly Share This Story:President Buhari receives Service Chiefs in Salah …They must go, Reps insist By Levinus Nwabughiogu Amid the calls for the sack of Service Chiefs over

Kindly Share This Story:Herdsmen …Cop narrates rescue team’s face-to-face encounter with suspected assailants By Perez Brisibe A policeman, who participated in the rescue operation of victims involved in

Kindly Share This Story:Mbisiogu …Says those in Wuhan yet to receive FG’s financial support By Charles Kumolu, DEPUTY EDITOR Coordinator of Nigerians in Diaspora Organisation, NIDO, in Guangdong