Former heavyweight champions Anthony Joshua is battle-ready to reclaim the belts he lost earlier this year.

The British-born boxer was stunned after kissing the canvass in the seventh round of their initial fight at the MGM Arena in June.

However, with a little over 24 hours towards their second meeting this year, Joshua has reiterated that he is not in any way scared of the challenge ahead of him.

Joshua, who clocked 30 few weeks back has seriously shed weight, compared his stature when he lost his belts.

The British fighter of Nigerian descent shared a picture of himself and his opponent in tomorrow's fight looking straight into their respective eyes.

Before his defeat in the middle of the year, Joshua had gone unbeaten in all previous matches - winning 21 of his 22 bouts on knockouts.

Legit.ng earlier reported that former heavyweight champion, Anthony Joshua, will face Andy Ruiz for the second leg of their showdown to hold in Saudi Arabia on December 7.

With barely five days to the much-anticipated rematch, a report from Saudi Arabia has confirmed that the British-Nigerian born fighter will rake in a staggering $85 million whether he wins or loses the fight.

The rematch, dubbed clash of the dunes, was scheduled to hold in Cardiff City after Joshua triggered a rematch clause in his contract with Ruiz's promoters. 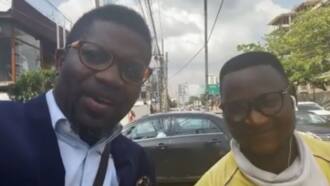 Years after: 11 War-torn villages in Ebonyi receive relief materials worth millions of naira

Kindly Share This Story:Relief items brought to the community by SEMA and PDA By Peter Okutu The community of Offia Orji in Ndiegu Okpuitumo, Abakaliki local government