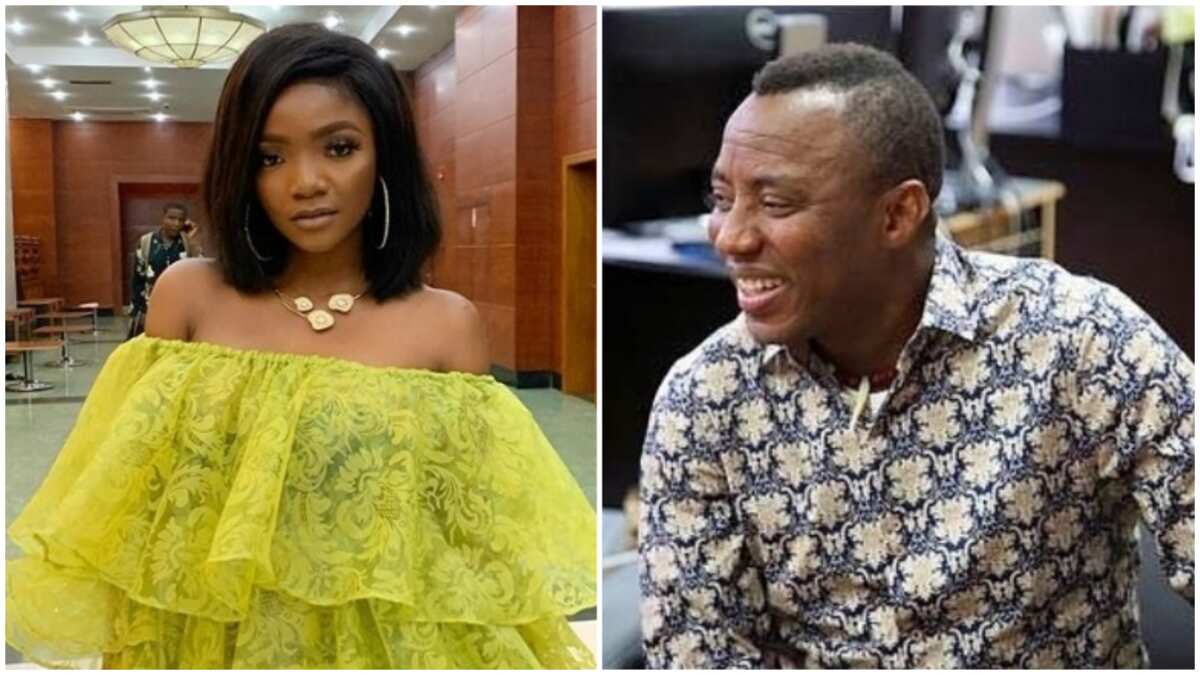 Following the re-arrest of Nigerian activist, Omoyele Soworo which has sparked quite an outrage on the internet, Nigerian singer, Simi took to social media to condemn the actions taken by the DSS. However, a fan was not pleased.

Earlier on, Legit.ng reported the news of how activist-turned politician, Omoyele Sowore, has been rearrested by the operatives of the Department of State Services (DSS) at the Federal High Court, Abuja, on Friday, December 6.

Following this, Simi took to her Twitter account to join many other Nigerian celebrities to condemn Sowore's re-arrest. She tweeted: “This Sowore matter is sooooo ridiculous.”

However, a Twitter user was not impressed by her tweet and urged her to do more considering she is an influential celebrity with a huge social media following.

The fan said: "“Yes it is Simi.But you can do more than tweet, you have a huge platform,u have followers,we can partner with you to give them a political education on why this act should not be condoned and what can be done about it.Our people need information, u can help spread it."

Simi however, was not having it as she wasted no time in checking the fan.

She responded saying: "Everytime ‘celebrities should go out’ – but u dnt have their back when they do. When u see the guns, u run. When their lives are on the line, u no dey. Who wants to die for ppl that don’t care. Why is som1 more qualified to fight cos they can act or sing? It’s everybody’s fight”

Meanwhile, Nigerian singer, Davido, has also reacted sadly to the development. According to him, justice is slowly becoming a thing of the past in Nigeria. According to him, a child whose dream is o become a lawyer might be discouraged after seeing the drama that played out in court between Sowore and the security agents.

Doctors call for investigations into death of Coronavirus patient 0

Mnangagwa has not suspended rentals 0

City of Bulawayo currently disinfecting hotspots in the CBD 0

Chamisa, Khupe told to find each other 0

Nigeria, other African nations yet to see the worst effects of COVID-19 - Atiku says, lists what Buhari, others must do to save economy 0

Breaking: Caverton appeals to FG to prevail on Wike to release its detained pilots 0

Other states must learn how Lagos is fighting coronavirus - FG 0

I Don’t Have A Dime For Giveaway – Rapper Eldee

Doctors call for investigations into death of Coronavirus patient

The Ministry of Health has revealed that a 79-year-old Bulawayo man who died on the 4th of April had tested positive of Coronavirus. The man

MDC leader Nelson Chamisa had the legitimate right to contest as the MDC Alliance Presidential candidate it has emerged. Political analyst and Constitutional lawyer Shephard

Zimbabwe's severe shortage of U.S. dollars is set to worsen as the coronavirus threatens the start of sales of tobacco, its second-biggest source of foreign