Former governor of Abia state and chief whip of the Nigerian Senate, Orji Uzor-Kalu, is set to return to court, this time to file a stay of execution on the 12-year jail sentence slammed on him on Thursday, December 5.

His lawyers are said to be carrying this out on his behalf after he and a former director of finance in his administration, Ude Udeogo, were handed jail sentences by a Federal High Court sitting in Lagos.

Daily Sun quoted one of Uzor-Kalu's lawyers, Chief Charles Ewelunta, as saying the senator's legal team now has the Certified True Copy (CTC) of the judgement. 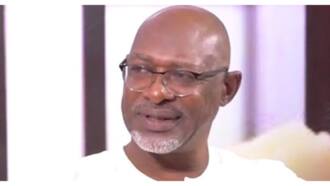 He said the CTC was being studied to help the team in filing an appeal that would be preceded by an application for stay of execution and bail.

Meanwhile, Legit.ng reports that the Centre for Anti-Corruption and Open Leadership (CACOL) has asked that the prison uniform to be handed the convicted senator should bear the tag ‘corruption villain’.

CACOL said this in a statement made available to Legit.ng on Friday, December 6, in reaction to the sentencing of the former governor of Abia state by a Federal High Court sitting in Lagos.

The statement by Debo Adeniran, head of CACOL, urged the federal government to ensure that all the assets, liquid or solid, be returned to Abia people to provide immediate relief through service to them.