- The PDP has alleged that Nigeria is sliding into dictatorship

- According to the opposition party, Nigeria is no longer governed by democratic principles of rule or law

- Going further, the party added that the invasion is a forceful suspension of our constitutional order

The Peoples Democratic Party (PDP) has condemned the invasion of the Federal High Court by the Department of State Services (DSS).

According to the opposition party, the situation further confirms that Nigeria is finally sliding into a 'frightening dictatorship'.

It said the nation is no longer governed by democratic principles of rule or law and dictates of the constitution.

Going further, the party in a statement signed by its national publicity secretary, Kola Ologbondiyan, the manner in which Sowore was rearrested can only be obtainable in Idi Amin’s Uganda.

"Without prejudice to the charge against the Convener of the “Revolution Now” movement, Omoyele Sowore, the PDP holds that, in a normal democracy, it is the duty of the court to determine the fate of an accused, according to the laws and not a resort to brute force by the government to silence persons with dissenting voices. "Our party notes that such a violation, as embarrassingly witnessed in the Abuja court this weekend, is a direct invitation to anarchy and a huge threat to the unity, peace, stability and corporate existence of our nation and the safety of our citizens," the party said.

Recall that Legit.ng had reported that Alhaji Atiku Abubakar, Nigeria's former vice president faulted the attack and rearrest of Sowore, the convener of RevolutionNow protest by personnel of the DSS.

Abubakar consequently called for an inquiry into the incident.

He also called on the FG to fish out those involved in the incident, which he also described as unacceptable.

"Today, I am in extreme anguish of spirit having watched the unfortunate drama that played itself out at the Federal High Court sitting in Abuja, in which agents of the state caused a commotion in court in order to frustrate a judgment of a court of competent authority," he disclosed on Twitter. 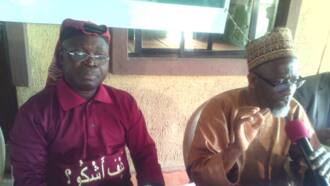 SERAP, others sue Gbajabiamila, Reps over plan to spend N5.04bn on 400 exotic cars