This is why we re-arrested Sowore in Abuja - DSS

- The DSS accuses activist, Omoyele Sowore, of trying to carry out acts inimical to national security

- Peter Afunanya, the spokesperson for the service, says it had alerted the public on December 3, that about a plot to by some groups to destabilise the country

The Department of State Services (DSS) on Saturday, December 7, said activist, Omoyele Sowore, was re-arrested in Abuja for carrying out acts inimical to national security.

The spokesperson for the service, Peter Afunanya, in a statement obtained by Legit.ng said Sowore who is facing trial for calling for a forceful takeover of government and suspected transnational illegal activities, shortly after being released from custody based on a court order, resorted to acts inimical to security which prompted his re-arrest. 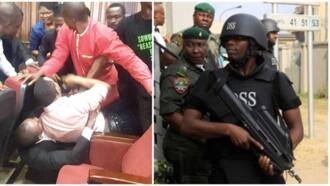 The DSS said it had alerted the public on December 3, that about a plot to by some groups to destabilise the country.

The service said some persons were already trying to spread the false narrative that Sowore was arrested in court as a means to organize an insurrection in the country,

They have continued to falsely curry and mobilize international sentiments and attention, through clear misrepresentation of the facts, for their selfish ends,” it said.

The service Sowore alone was arrested while his co-defendant was not picked because he is not currently a person of interest.

Meanwhile, the DSS has denied reports that its officers arrested journalist, Omoyele Sowore, in the Federal High Court, Abuja on Friday, December 6.

The secret police in a statement on Saturday, December 7, by its spokesperson, Peter Afunanya, claimed that the journalist’s supporters were only acting an orchestrated drama, The Cable reports. 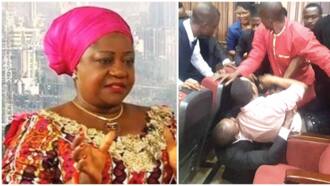 The DSS said it had to make the clarification following misinformation in the media which claimed officers of the service entered the court to arrest Sowore.