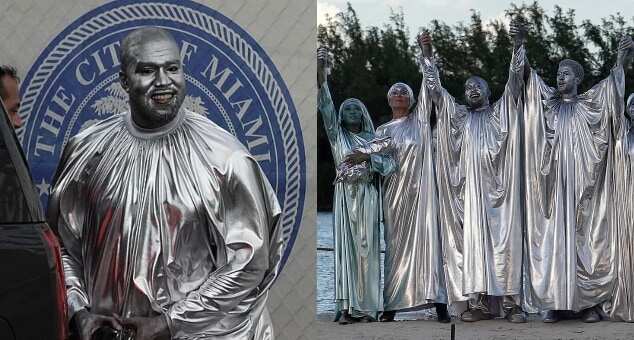 - This was the first act he appeared on stage after narrating the debut one, Nebuchadnezzar, backstage

Kanye West never fails to hit headlines with his bizarre but rather unique sense of fashion.

The now born-again rapper was spotted in Miami, USA on Sunday, December 8, with his whole bandliterally wearing silver.

According to Daily Mail, Kanye was on sight for his second opera, Mary, held at Miami Marine Stadium on the final day of Art Basel.

From head to toe, the 42-year-old looked shinny in silver with a baggy outfit and paint all over his body.

He was wearing his new collection of the Adidas slides which were also covered in silver with socks to match.

The opera was all about Mary the mother of Jesus and events surrounding the birth of the son of God.

This was his second performance after not making an appearance on stage for the first one called Nebuchadnezzar.

Back in October 2019, he released his album, Jesus is King, a Christian hip hop album that set a unique sales recordsby topping all billboard categories.

The father of four featured his young family in the video to one of the hit songs in the album, Closed on Sunday.

Meanwhile, Legit.ng earlier reported that the American rapper left prisoners in tears during a praise and worship session at Harris County jail in Texas, US.

It was gathered that Kanye on Sunday, November 17, led about 200 inmates and prison staff in prayers and songs. His worship session was said to have moved a lot of them into tears as he reached out to the innermost part of his soul to deliver a special performance.

The musician was accompanied by his choir that performed several songs from his recently launched album dubbed Jesus is King. The convicts from the correctional facility were immersed deep in worship.