Editor's note: Bio, a historian and wrote from the University of Ilorin, writes on the killing of 22-year Ropvill Dalep by members of the Boko Haram terrorist group.

Bio, queries the sudden quietness from the National Association of Nigerian Student over the death of Dalep who was a Plateau state student at the University of Maiduguri.

Insecurity: God is angry with the leadership of CAN - Prophet Itodo

The students who pioneered the idea intended the organization to be a rallying point for Nigerian students.

For decades of the existence of NANS which assumed its present nomenclature in 1980 saw the organization vigorously discharging the mandate of pursuing issues centred on the country’s education system, welfare or rights of students and challenging bad government policies with alternative perspectives.

Until the late 80s and as one of its leaders in my undergraduate days at the Ahmadu Bello University, (ABU) Zaria, NANS defined its existence as a formidable and potent students’ body. But the reality today is different. NANS has morphed into a quasi-political organization, comprising lobbyists and debased chasers of the shadows of illicit wealth from corrupt politicians.

My heart bled when I read contents and arguments raised in the public statement signed by NANS, one Danielson Akpan released mainly in respect of Ropvil Daciya Dalep, an undergraduate student of the University of Maiduguri, who was abducted by Boko Haram on his way back to campus from Jos and later killed. May the soul of Dalep and other victims of terrorism in Nigeria find eternal peace.

Adamawa pastor's death: CAN got it mixed up by Femi Adesina (opinion)

But the statement advertised the final degeneration of NANS to an embarrassing level. Our students’ body has lost its voice of conscience. They canvassed positions far beyond their purview and displayed generous ignorance anchored on presumptions. We have never had it this bad in NANS.

The contents of the public statement portraited NANS more like a pressure group for politicians and betrayed the essence of her existence. Worse still, it never made pretensions of mutating into worthless paid activists in the service of masked paymasters.

How it has become the duty of NANS officials to dabble into the campaigns of advocating for the sack of service and security chiefs beats my imagination. This is the subsisting posture and sermons of politicians or sabs hellbent on reversing the gains Nigeria has recorded on the Boko Haram/ISWAP counter-operations.

It is quite tragic and it traumatized me to realize that NANS could afford to commercialize the killing of one of her own by visiting politicians with press statements ostensibly written to extort money from Nigerian politicians and spite the government. 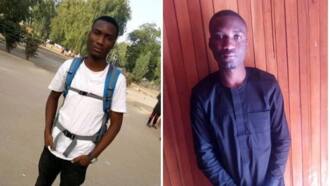 That the students’ body has become a willing tool in the hands of desperate politicians who are covertly instigating and funding terrorism, violence and killings in the country to discredit the administration of President Muhammadu Buhari is most incredible.

When we functioned under NANS, the union was respected each time it raised its voice on a national issue.

There were no lone rangers in the union as the statement exposed, but decisions were debated and decisions collectively endorsed before stepping out in public domain. Our position was concrete and our views held sacrosanctly.

But we have consciously fretted away such veneration. We are pained. We are bereaved over the killing of the UniMaid student and other Nigerians by Boko Haram/ISWAP terrorists. We mourn with the grieving families and all Nigerians caught in this nightmare and quagmire of terrorism.

But for those who are still alive, the action of the NANS should worry us more. It is senseless and outright wickedness to side with oppressors of your country in her moment of torments as demonstrated by the greedy, selfish and unfocused leadership of NANS. They are worse than the proverbial snake in green grasses.

The world and Nigerians have the divine responsibility to closely monitor the destructive tendencies and satanic inclination of NANS. I suspect some of them are on the payroll of the foreign sponsors of Boko Haram and ISWAP terrorism in Nigeria.

I was shocked that NANS' sight was blurred in seeing the determination, commitment and difference the Federal Government of Nigeria under President Muhammadu Buhari has made and continue to make in quenching the consuming fires of insurgencies and insurrections in the country.

Perhaps, by NANS cursed wisdom, President Buhari is wrong for reclaiming the 18 LGAs in the Northeast which Boko Haram forcefully annexed before his Presidency.

Buhari could be wrong for freeing over 20,000 Nigerians held in captivity in secret camps by insurgents.

The President is wrong for deflating IDPs camps in the north east and the steady progress in the reconstruction and rebuilding of the Northeast devastated by years of insurgency. These are the reasons I suspect have caused the restlessness of these odious NANS officials.

But NANS cannot play this smartness on Nigerians. We are neither deceived by their veiled devilry, garbed in polluted wisdom and sympathy with terrorists’ kingpins. They want the Service and Security Chiefs who have achieved these milestones in counter-terrorism in Nigeria to be sacked and pliant ones appointed to reverse the gains. This is a crazy idea!

I have discerned that this has been the desire of foreign agents and other sponsors of terrorism in the last year. It has been the fervent prayers of Boko Haram sponsors. And it’s unfortunate that NANS has submitted itself to the dance of such destructive drumbeats, with the lyrics trumpeted by enemies against their own country.

Let me remind.NANS that their induced anger with President Buhari’s determination to regenerate and redeem Nigeria cannot change this narrative.

NANS must realize that under the Buhari Presidency NNPC is no longer open for anyone to loot. Therefore, by accepting to play such unpatriotic roles of emergency activists in the hope of approaching any government official to suppress a script or to collect cash and become rich or live large on campus is an unrewarding investment now.

Opinion: Facts PMB should hear about NBET by Bernard Balogun

It is not a lucrative business now. NANS must be goaded into the realization that nothing under the Buhari Presidency pays, except hard work. So, they can continue to spew the nonsensical and destructive campaigns, but no one’s ox is gored.

Under this government, it has also not been easy with paid emergency activists. The NANS leaders can confirm from the experiences of Charlie Boy, Deji Adeyanju and several others who have had to diversify their trade in order to keep afloat. And in truthfulness to these NANS leaders, they are worse than the devil by joining the league of those pulling down Nigeria.

Why would they think of using the killing of the UniMaid student as a source of cake to service their epicurean lifestyles? It is the lowest level of debasement any human being on earth can condescend. Today, I can confirm that truly, NANS itself has also died! It should first mourn its funeral. What a pity!

Why Buhari will not sack service chiefs now ― Boss Mustapha 0

Bobrisky Cries Out For Help, Accuses His Driver Of Stealing His Exotic Benz 0

Abike Dabiri meets Nigerian who is president of Toronto Raptors, introduces him to Buhari (photos) 0

US gives Nigeria conditions for review of visa ban policy 0

Kindly Share This Story: As the security situation in the country continues to degenerate, a security expert and chief executive, Scutarii Advisory, Mr Hilly Cookey-Gam has

Effyzzie Music/Rebel Movement’s Brainee kicks off 2020 with a brand new single titled “Amala”.The cut arrives after the success of his 2019 extended play titled “Chapter 1”, which