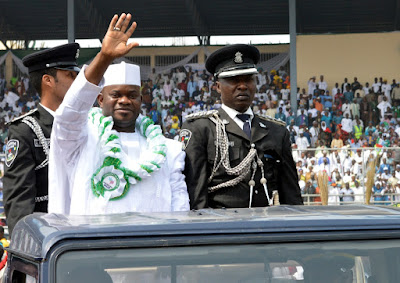 Kogi State Governor Yahaya Bello and his deputy Edward Onoja will be sworn in today for a second term in office.

The inauguration, scheduled to hold at the Lugard House, is to show the low tone disposition of the government, which said it will focus on revenue drive and improvement in the civil service. The program is expected to be low key as the governor is said to be opposed to anything elaborate.

Bello was sworn in for his first term at the Lokoja Confluence Stadium. Only 250 invitation cards are said to have been sent out. Dignitaries expected at the event are some All Progressives Congress (APC) governors and other top politicians.

Also expected to grace the inauguration is James Faleke, running mate to the late Prince Abubakar Audu in the 2015 governorship election.


Already, the Government House is wearing a new look with some broadcast outfits setting up their gadgets.