Kobe Bryant, late NBA legend, has revealed how his daughter Gianna Bryant planned to carry on his legacy in the world of basketball.

The 41-year-old died in a helicopter accident along with the 13-year-old and seven others on Sunday, January 26.

None of the nine people on board however made out of the chopper alive as the aircraft was said to have caught fire in the process.

The LA Lakers legend was most times in the company of her first daughter almost at every match venues.

"The best thing that happens is when we go out and fans would come up to me and she'll be standing next to me," Bryant said," 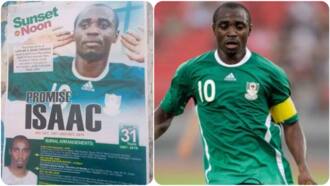 The former LA Lakers star according to CNN told The New Yorker in a 2014 profile has been playing along with his father since age three.

According to reports, the NBA legend and his daughter were on their way to training at the Mamba Sports Academy.

Kobe was on courtside when Lebron surpassed his 33,643 points during a game with Philadelphia Sixers.

The basketball legend alongside eight others including his 13-year-old daughter perished in a helicopter crash.

The helicopter’s pilot was told by the traffic controller you’re too low moments before he crashed in thick fog on the west coast.

The life and death of Juice WRLD: A legend gone too soon

Meanwhile, the late American basketball legend could be used as the new NBA logo as a petition has been written to that effect which already has 200,000 signatures supporting the motion.

With the sporting world mourning the loss of one of their biggest icons, fan support has been everywhere.

The 41-year-old and his daughter Gianna were involved in a helicopter crash that saw seven other people pass away in an incident that occurred in California.

Also, it has emerged that the basketball icon's absence will not only be felt by the sporting fraternity, the business and investments family has also been hit hard by Bryant's demise.

Before the helicopter crash that claimed his life on Sunday, January 26, in Calabasas, California, Bryant had used the vast sporting experience he had accrued from the court to build a business empire valued at over $991 million.