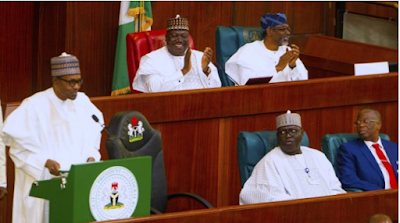 The Revenue Mobilisation Allocation and Fiscal Commission (RMAFC) says it will review the remuneration of political office holders in the country.

According to Elias Mbam, the commission’s chairman, the process may lead to an upward or downward review of the salaries.

“It is the intention of the commission to review the remuneration of public office holders this year and the process will determine whether it will be a reduction or something else,” he told journalists in Abuja on Monday.

“It is part of our primary responsibilities so that the remuneration will reflect current realities.

“I don’t want to pre-empt what the result will be. It is a process and if followed appropriately, we will arrive at the appropriate answer. The preliminaries have commenced already.”

It is, however, unclear if the basic salaries of politicians will be adjusted to reflect the new minimum wage as the last wage review carried out by the RMAFC was in 2007.

“The huge allowances and salaries received by political office holders are one of the things that encourage political office seekers to engage in electoral violence because they want to get there at all costs,” he said.

“To minimise political violence in Nigeria, you must cut down the incentives given to political officeholders.

“The economy cannot continue to bear the weight of the allowances and salaries paid to political officeholders. In comparison to other countries that is doing well, Nigeria pays huge salaries to political appointees without measurable commitment to the job.

“We can’t afford to be overpampering one segment of the society while leaving workers to suffer. The new minimum wage is less than $100.”