- The delegation was led by the minister of labour and employment, Dr Chris Ngige

Governor Udom Emmanuel has stated that an effective and entrenched social security scheme will serve as a panacea for diverse agitations across Nigeria.

The Akwa Ibom state governor stated this when he hosted the minister of labour and employment, Dr Chris Ngige.

Ngige and a team of Nigerian Social Investment Trust Fund (NSITF) officials are in Uyo for a two-day retreat. 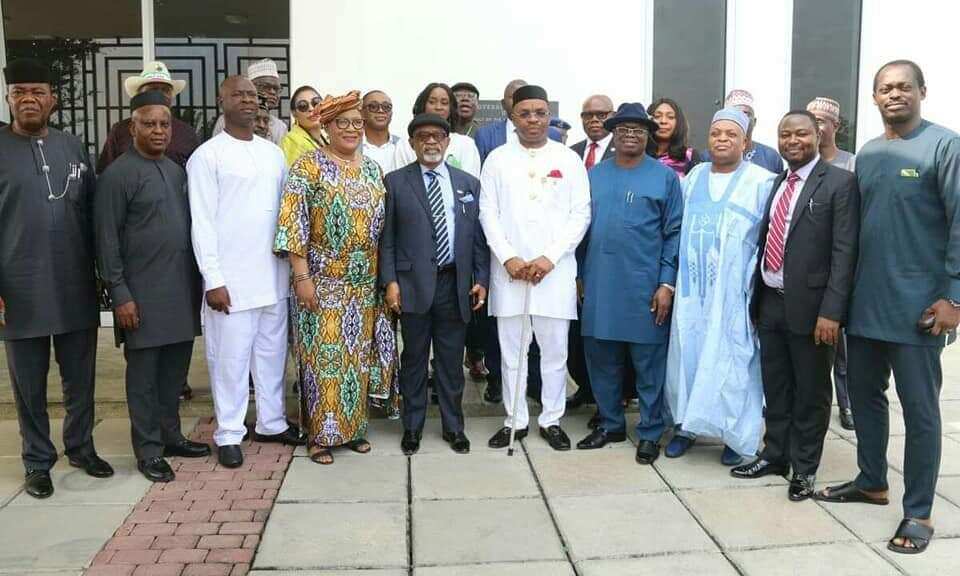 The NSITF delegation to the governor was led by the minister of labour and employment, Dr Chris Ngige. Photo credit: AKSG
Source: Facebook

Governor Emmanuel charged officials of NSITF to step up enlightenment on the scheme to create awareness of its implications and earn the trust of workers.

He noted that social security keeps the people are calmer and lessens agitation, stressing that Nigeria’s huge population cannot ignore such a scheme.

Why NYSC scheme needs to be sustained - President Buhari

His words: “We need more enlightenment. People still contribute but they don’t know what to do and what steps they need to take.

“I think in this age of social media there should be a proper website to educate people because you need workers’ trust. So awareness from your own side to show that people are saving for their own future.”

Governor also drew the minister’s attention to exclusion of Akwa Ibom state from the sovereign wealth fund board despite being the highest contributor to the fund.

“Some of these institutions are things that we really need for proper social structures in the country. These are institutions that are not supposed to follow partisanship,” he said.

Speaking further, he said Akwa Ibom with a natural draught of 17.3Km can easily have a seaport to serve the entire South-south and South-east.

Speaking earlier, Dr Ngige, thanked Governor Emmanuel for the warm reception accorded them in the state, describing Uyo as the pride and choice town of Nigeria’s south-south region.

All hope is not lost for Nigeria, says PDP governor

He, therefore, urged the Akwa Ibom state government to enrol the state’s workers in the scheme, to be at par with employees of the federal government and their counterparts in Lagos.

Meanwhile, the Nigeria Labour Congress (NLC) has directed any of its state chapters to proceed on industrial action if negotiations are not going as planned as regards the new minimum wage.

President of the NLC, Comrade Ayuba Wabba, gave the directive in Abuja on Tuesday, February 4, saying 15 states including Akwa Ibom have signed an agreement with labour to pay the new minimum wage.

Why Buhari will not sack service chiefs now ― Boss Mustapha 0