- The fire which was said to have been at the resident of Chukwuma Aduhuba took place on February, 15

Residents of Ugwu Chelekwu village, Okija, Ihiala local government area of Anambra state have been thrown into grief and mourning after three siblings lost their lives to the cold hands of death.

Nigerian Tribune reports that the siblings, two boys and a girl who was two months, two years and five years, were burnt to death in a fire outbreak on Saturday, February 15, inside their parent's home.

As at the time of filing this report, the cause of the fire outbreak is unknown by the authorities. SP Haruna Mohammed, Anambra state police public relations officer, in a statement, confirmed that the tragic incident was at the resident of one Chukwuma Aduhuba at about 2: 00 am.

The statement read: “Today 15/2/ 2020 at about 02:am, there was a fire outbreak at the resident of one Chukwuma Aduhuba ‘m’ of Ugwu Chelekwu village, Okija in Ihiala local government area of Anambra State. 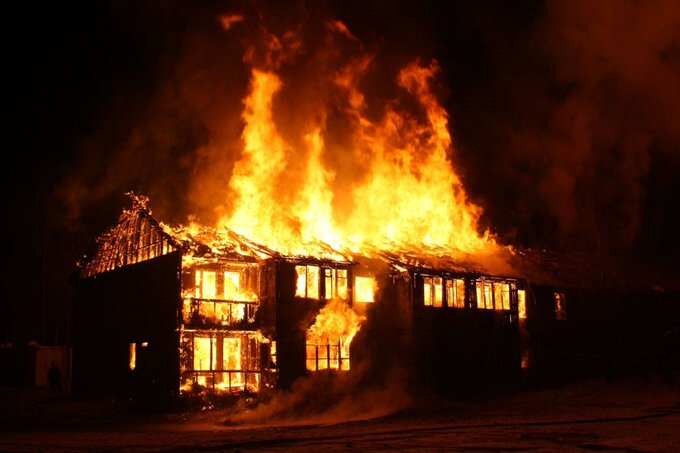 Three siblings were burnt to death in a fire outbreak inside their parent's home.
Source: Twitter

Following the distress call, Police patrol team led by DPO Okija Division rushed to the scene, cordoned off the area and the fire was put off by local volunteers before the arrival of firefighters."

All three children have been buried by their parents in accordance with their customs. A discreet investigation to ascertain the cause of the incident has been ordered by the Anambra state commissioner of police, John Abang.

Meanwhile, Legit.ng previously reported that eight people reportedly lost their lives in Dan Musa town of Danmusa local government area of Katsina state when a gas cylinder exploded in the process of cooking.

The tragic incident occurred at about 5 pm on Saturday, December 14, 2019. The victims were three married women and their five children. One of the deceased, Maryam Shuaibu had visited the town from Abuja to attend a wedding ceremony and was staying in the house as a guest of the other victims.