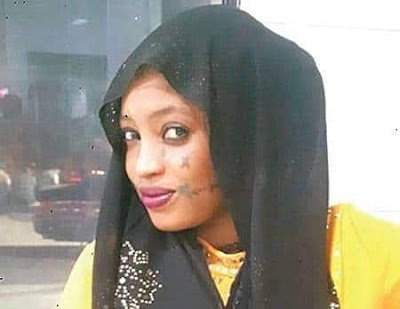 A beautiful Fulani woman is helping the Nigerian police to unravel the epidemic of kidnapping north of Nigeria, after she confessed that she was instrumental in the abductions of some of her boyfriends.

The woman, identified as Hauwa Yunus, lives in Masaka village in Nasarawa State, though her home state is Jigawa. Because of her waywardness, she has had three failed marriages, the Tribune on Sunday reported.

A police source, Abdullahi Alhassan told the newspaper that Hauwa earned the reputation as a notorious kidnapper, as she was linked with the kidnap of several prominent Nigerians.

Though just 24 years old, her criminal record, it was said, was far advanced than her age. She was allegedly a specialist in using her beauty to lure men into relationships and would later kidnap them for ransom.

She was also said to have confessed to raping some of her victims as a result of her strong sexual appetite, especially after consuming some illicit drugs.

According to Tribune newspapers, Hauwa masterminded the kidnapping of all her boyfriends, who would only be released after the payment of ransom to her accomplices.

“The long arm of the law caught up with her recently in Abuja where she confessed to the police that she was in fact behind the kidnapping of her first boyfriend, who she confessed was rich and very caring. She stated further that when she realised that the man had several other girlfriends she decided to make money from him by kidnapping him”, the paper reported.

According to her confession, she lured the man to one hotel where they both spent the night together. The man did not know that she had arranged for him to be kidnapped on their way out of the hotel.

“Unknown to him [her boyfriend], I have planned with other members (of my gang) how he would be kidnapped. After several negotiations, he paid two million naira and I collected two hundred thousand as my share.

“Even though he did not know I planned his kidnap, when he was released he still wanted us to continue with our relationship,” she confessed.

Hauwa also told the police that she organised the kidnapping of her second boyfriend when he stopped by the roadside to buy some items on his way to his house.

“He paid the sum of one million naira as ransom and I collected fifty thousand naira as my share,” she said.

“Her third boyfriend, according to her ,was not rich like the others. He eventually paid N500,000 for his release. Despite the fact that the man was poor, according to Hauwa, she spent more time with him than the others.

“Apart from her lovers, Arewa Live was informed that Hauwa also confessed to hatching the plan to kidnap her closet friend, Zainab. She told her interrogators that she was with Zainab on one occasion and overheard her talking over the phone that she would soon get a credit alert of N600,000.

“I thought that the best thing to do was to kidnap her and collect the money from her. Eventually, I kidnapped her,” she said.

“But Zainab, her bosom friend, did not survive the ordeal. Due to inhuman treatment she was subjected to by her abductors, she sustained life-threatening injuries which eventually led to her death.

After Zainab’s death, Hauwa was said to have ransacked her friend’s room. She took her ATM card and withdrew all the money in her account. Not only that, she took her car, repainted it and later sold it, including almost every other thing her friend owned including personal effects like clothes.

Hauwa was eventually arrested by the Inspector General of Police Special Squad under the leadership of Deputy Commissioner of Police, Abba Kyari.

She is currently helping the police in their investigation of other kidnappings in different parts of the North.