- A Nigerian man was recently sighted preaching on a plane

- In the video, the man is seen standing in the plane and preaching while holding a Bible up

In a country like Nigeria where religious beliefs are considered a pretty big deal, it is common to see people preaching not just in churches, but basically everywhere.

This time is no different. Currently trending on social media is a video of a Nigerian man preaching; not on a bus, but on a plane. In the video, the man is seen standing and preaching, with a Bible in his hands.

The video which was shared by a Nigerian man identified as Victor Ehikhamenor, shared the video on Twitter. Due to the oddity of it all, the video generated quite a number of reactions from people who found it hilarious. 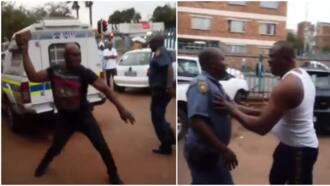 Victor wrote: "If you think you can skip church just because you nor dey naija and you dey for inside plane, you never ready. Welcome to a full service by a Nigerian “aviation pastor”. It is well!"

In other news, a Nigerian man has taken to social media to share a video of a preacher he confronted in Lagos who he claimed was disturbing the public peace with his loud preacher.

The man identified on Instagram as @captainblazee recorded a video of a preacher whom he confronted about disturbing the public with his loud and 'un-gospel' like preaching in which he scared people with the thought of death. 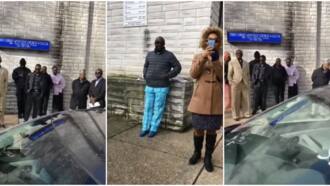 Sharing the video, he wrote: "I met this frustrated preacher on my way out early today. I think there's a lot of them around Lagos and something should be done about this.They always preach with threat of death, fear and looking at them, hmmmm! What you see is bitterness, pains and hatred.