- Wisdom, a Nigerian man, has popped the big question to his Russian girlfriend

- Fortunately for him, he got a big yes to the proposal from his lover

A Nigerian man known as Wisdom is preparing to take the big step with his Russian girlfriend as he proposed to her on Valentine ’s Day.

A promising singer who is based in Russia, Wisdom asked the big question at Saint Petersberg and he got a resounding yes.

The proposal happened on Friday, February 14, during Valentine’s Day party organized by the African community in the country. 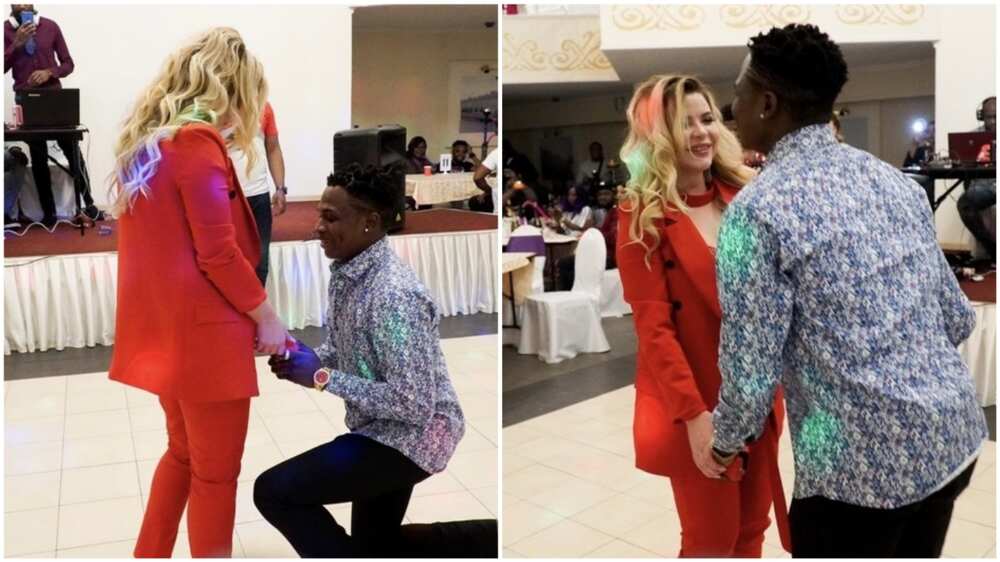 A collage showing how the Nigerian man went down on one kneel to propose to his girlfriend. Photo source: YabaLeft
Source: UGC

Meanwhile, Legit.ng earlier reported that the US visa ban placed on Nigeria and 13 other countries on Friday, January 30, aborted Saheed’s plan to give his family a comfortable life in America.

Prior to the ban, 32-year-old Saheed hoped to buy a house in Houston, move together with his wife Azeezat and have children.

The Nigerian man met Azeezat through his aunt in Nigeria as the two had a special connection over their similar medical backgrounds.

After their marriage, the wife’s paper to travel was arranged as they waited for the whole process to be completed.

Saheed said nothing is sadder than for newlyweds to face the uncertainty that they may never be together in the same place.

Busayo Fasidi, a family immigration lawyer in the US, said the people who are trying to bring their families from overseas will be gravely affected by the ban.

The family immigration lawyer said that while she was shocked by the ban, the Nigerian government is to be blamed.

Chris Ulasi, a professor from Texas Southern University, said he is totally against the ban as no country should place undue restrictions on other countries. Saheed said that with the new development, bringing Azeezat to the US is going to be a hard one to achieve.

“As it is with the travel ban right now, our future is really not certain. We’re just looking at every legal way possible to be able to get her to come here. But outside of that, it’s kind of hard to plan anything right now not knowing that it’s certain,” he said.