- The APC has been described as a funny organisation

- Lawal also said the party should be reorganised

The All Progressives Congress (APC) has been described as a “funny” organisation.

The description was made by Babachir Lawal, former secretary to the government to the federation (SGF).

He disclosed this while speaking with journalists in Abuja.

According to him, national chairman of APC, Adams Oshiomhole, has not been fair to the north.

He argued that this means that party members from the North have been disenfranchisement.

“This APC is funny, as we speak, the chairman and his loyalists have suspended the deputy national chairman (north), the whole north, the chairman, national vice-chairman (north-west) which is the largest geographical zone with seven states has been suspended, he is no longer attending national working committee meeting,” he said. 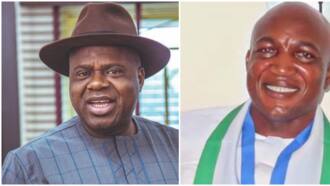 Meanwhile, Legit.ng had reported that some protesters on Monday, February 17, converged at the All Progressives Congress (APC) secretariat in Abuja to demand the removal of the national chairman of Adams Oshiomhole, over the party’s loss of Bayelsa governorship seat.

The protesters under the aegis of Concerned APC Youths stated that Oshiomhole should be replaced to save the APC from losing more states to the opposition.

The demonstrators who carried various placards with inscriptions calling for Oshiomhole’s sack argued that the APC had witnessed dwindling fortunes under the national chairman.