Odion Ighalo made his second appearance for Man United in their Europa round of 32 clash with FC Brugge.

The Nigerian striker came in for Anthony Martial in the second half but failed to find the back of the net for the second game running.

However the Red Devils took an away goal advantage back to Old Trafford as both sides will settle the scores in a week's time.

But Ighalo seemed to be confused in the competition he was playing in after he told a journalist he was happy United took away one point in a knock out phase of the Europa League.

In the post-match interview, OJB Sports asked the 30-year-old how he felt about playing a draw away from home.

"It's a good point for us, one-point is very good for us to take back home," Igahlo told OJB Sports.

"And the draw too is very good too because we are playing a home game next and it's an advantage.

"So its's better we didn't lose today so we are looking forward to the next game."

The journalist went on to ask him if he was pressured to hit top form with United considering their winning tradition and pedigree.

"Well Man Utd is a big team, they have a winning tradition, I think I have to keep doing my job and when that time comes the goals will start coming," Ighalo added.

"I did three or four training with the team and I'm getting used to the team. 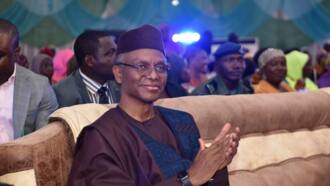 "I'm working really hard, doing extra training to meet up because i have not played a game since December.

"It's the Premier League and the league here is quite different i'm getting closer to that."

Ole Gunnar Solskjaer's men will take on Watford next at Old Trafford, a team that beat them in a fixture in the first half of the season.

Meanwhile, Legit.ng had earlier reported that Gabriel Jesus is reportedly being admired by Juventus boss Maurizio Sarri and could possibly join the Italian champions in the summer.

Man City have been rocked with crisis with UEFA and a two-season Champions League ban has followed suit for breaching Financial Fair Play rules.