Speed Darlington speaks on relationship with Naira Marley, says there is no beef

- Controversial US-based Nigerian rapper, Speed Darlington, has taken to social media to speak on his relationship with his colleague, Naira Marley

The Nigerian music industry is a very competitive one and people who relax their efforts would soon see themselves being overthrown from the top spot.

There is almost always a new music act every other day in the industry and those who claim to have been there for a long time and are not as successful, always have something to say about the newbies.

Controversial US-based Nigerian rapper, Speed Darlington, has taken to social media via his Instagram page to speak on his relationship with his fellow music star, Naira Marley.

According to Speedy, there is no beef between him and Naira Marley, but the latter is his son.

Speedy shared a photo of himself and Naira Marley shaking hands as he explained further that he has been in the industry before him and even started making ‘big booty music videos’ since 2010.

The Bang-dere-reng crooner said that he is now ready to spend every money he made in America on radio, perhaps so that his music will have more reach.

In his words: “No beef between us but he still my son. I been on the scene before him and I have been dropping big booty music video since 2010 he’s my son.Only thing is that I took for ever to go home he went home before me & dominated the radio that’s all, but I’m coming right back for the rest of the year radio is mine every penny I saved in America I will spend it all on radio.” 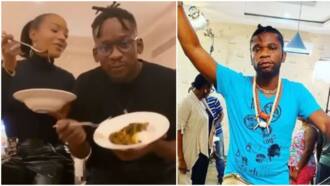 Speed Darlington questions how Mr Eazi is able to date a billionaire’s daughter, asks for his ‘juju’ man

Speedy said that he is curious to know what country Mr Eazi’s voodoo man is from, for him to be able to date a billionaire’s daughter.