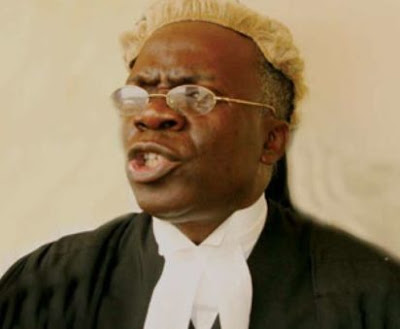 Frontline social crusader and Lawyer, Mr Femi Falana (SAN) on Saturday alleged that some corrupt political elites are responsible for the spate of religious intolerance in the country.

Falana made the accusation in his speech at the 5th UFUK Dialogue International Conference on Love and Tolerance held in Lagos.

The theme of the Conference is `Countering Violent Extremism for Peaceful Co-existence.’


The NGO also has the mandate to establish a common platform aimed at information and opinion exchange.

It also focuses on dialogue and peace activities in academic and intellectual levels among different members of the society.

Falana said that some corrupt political office holders were the ones pitching the citizens against themselves as a cover up to their corrupt practices so as to get an alibi.

“There are evidences that corrupt political office holders are the one’s fueling religious intolerance in the country just to cover up for their sins against humanity.

“The political leaders are not sincere with stopping all these vices because that is a way to distract the people from their corrupt cases while the people are battling, engaging themselves.

“As a person, people often ask me why I am standing in for a Muslim and the answer they get is that I don’t know anyone.

“I am  defending all the oppressed irrespective of religious affiliation. However our own leaders are busy spreading falsehoods about religion,” he noted.

Falana said that the two main religions in Nigeria have things in common, hence there should not be division for peaceful co-existence.

“There are many things the two religions have in common, one is that they believe that there is one God above all, they both fast and other similarities.

“There is no need not to live peacefully among ourselves if we believe in one supreme God. We should love ourselves because God is love, this is important for us to know.

“I have been in the position to advise some rich people to invest in education and establishment of industries because that is the way to go to get our youths engaged,” Falana said.

The president of UFUK Dialogue foundation and the convener of the conference, Mr Kamil Kemanci in his presentation titled “Interreligious Dialogue: If not; what else?,  said that peace remained a necessity.

“UFUK dialogue serves to stand by societal peace, love, tolerance, and compassion in support of human dignity and the greater good of humanity.

“Dialogue and peace has always been and still remains a need, a necessity, and a must for us to have a healthy and more productive society.

“The work for peace needs a dimension that goes beyond any ideology, political system, above any religious movements or religious authority.

“The most important factor in the creation and promotion of a sustainable peace is the realisation of good governance while promoting justice through increased transparency, accountability, and the rule of law and strengthening of democracy.

Kemanci said that violence worldwide was on the rise and becoming increasingly complex and multidimensional, adding that almost half the worlds people had been affected by political violence in recent years.

“Religious and cultural leaders have a special responsibility to join hands with fellow Nigerians to save our world from the scourge of terrorism and violent extremism.

“Violence and terrorist recruitment within communities must be fought and countered by working with local communities to set up the necessary framework for identifying at-risk youth,” he said.

“Structural deficit is responsible for religious extremism in Nigeria because people desire to get justice which they are being denied.

“When there is poverty, people will be aggrieved and will take up arms at slightest provocation against one another looking for justice.

“Our security outfit alone cannot stop violence, and that is the reason we have agencies such as IPCR to deal with the soft issues such as creating enlightenment for the public,” he said.