Mike Tyson could not curtail his emotion as he was seen jubilating amid the crowd after Tyson Fury handed Deontay Wilder a devastating first career defeat.

Wilder could not trigger the magic as he was totally outsmarted from the first bell to the seventh round when the showdown was stopped by the referee.

Wilder's corner had to throw in the towel to save the immediate WBC champ from what could have been a more terrible night with Fury's brutality taking a dangerous turn.

Now the footage of the legendary former heavyweight champion and TKO king emerged in the background. 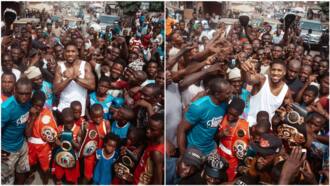 Mike "Iron man" Tyson headlined the fight and was given a medal by WBC in the ring before the fight alongside other boxing legends Evander Holyfield and Lennox Lewis.

Dressed in a black overall suit and wine trousers, the 53-year-old former heavyweight champion jumped up in delight after the referee put the fight on stop with Wilder's life on the red line.

Mike Tyson's wild jubilation might be owed to the fact that Wilder had always taunted him as a potential opponent to defeat should both fight in the same prime.

"No disrespect to Mike Tyson, in his era he was the best but this is a new era," the 34-year-old said.

Meanwhile, ahead of the epic showdown Mike Tyson threw his support the British pugilist, saying he shared the same name with him.

“I was always biased toward him (Tyson Fury). He is very likeable, he is a nice person," Mike said.

Earlier, Legit.ng had reported that Deontay Wilder has been reportedly rushed to the hospital following a shocking first career defeat to Tyson Fury.

The Bronze Bomber failed to replicate his dominance which has made his career an enviable one as it was the Gypsy King who proved the magic to become new WBC heavyweight champion of the world.