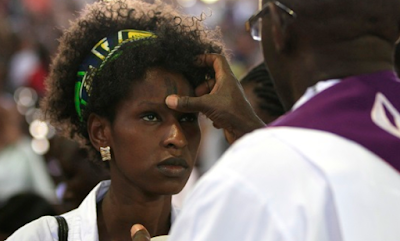 Millions of Christians across the Diocese of Roman Catholic Church in Nigeria have concluded plans to come out on Wednesday, 26th of February in all black attires during the procession of Ash Wednesday to show their grievances over the killings in Nigeria and the insecurity situation of the country.

The Church has also mobilised its members all over the world to pray for the current insecurity challenges of the country.

He said the planned “Black Dress Protest” is across all the parishes in Nigeria.

Gobi, while urging his parishioners to come out in their numbers, said the church would continue to show signs of concern over the unjust killings of Christians and Nigerians until the security situation is improving.


“We will continue to talk to our leaders that this way, we want to let them know that the killings of Christians by Boko Haram and killings of Nigerians by arm bandit and kidnappers is a condemned situation and must stop.

“Until we see the will to stop these ceaseless killings and an improved security situation in Nigeria where human lives must be respected, what we are experiencing in Nigeria now is not of God, is Satanic.”

While speaking with members of the church, also gathered that the same announcement about the planned protest was made in all the parishes of the Jalingo Diocese and beyond.

The information available shows that the Roman Catholic churches in big cities of Nigeria like Abuja, Lagos, Port Harcourt and other major cities would carry out the “Black Dress Protest” on the streets while other churches who are found in vulnerable areas would observe their protest in their churches as they Mark the Ash Wednesday.