- Wilder failed to replicate his dominance in the heavyweight division in Las Vegas, thus suffering a devastating defeat to Fury

Floyd Mayweather has broken his silence on Deontay Wilder's loss to Tyson Fury, saying his fellow American should be supported during his trying time instead of the unpleasant comments that continued to trail his shocking defeat.

Wilder was deposed of his heavyweight championship in one of the greatest upsets in history in Las Vegas on Sunday morning, February 23, with a technical knockout by Fury.

The Bronze Bomber was a shadow figure of himself and was totally outsmarted by the British who sent him out of the ring via a seventh-round stoppage. 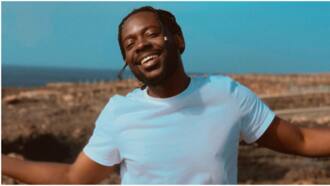 Adekunle Gold charges parents to raise their children properly, says ‘boys will be boys’ is a lazy parenting strategy

Wilder's corner had to throw in the towel to save him from Fury's brutality which was taking a dangerous turn after suspected eardrum burst and lip damage.

Mayweather has now called for support for the immediate WBC champion, saying he still remained the king of his despite his first career loss.

In a post on his Instagram page, the retired American boxing legend said Wilder should not be chided because he "has accomplished many triumphs."

"Win, Lose or Draw.... Deontay @BronzeBomber is our brother that has accomplished many triumphs," the former champion said.

"And as a community, we should all uplift and support him throughout it all. No matter what, you're still a winner in my eyes, King!" Mayweather said accompanied by the image of Wilder.

Mayweather, unlike Wilder, did not suffer any defeat through his enviable boxing career with his last fight coming in 2017 against UFC star Conor McGregor. A king of many divisions, 40-year-old Mayweather never tasted any defeat in his all 50 fights and he is considered one of the greatest boxers of all time.

Meanwhile, Legit.ng had reported that Tyson Fury has been ranked number one fighter in the heavyweight division following his flawless victory over Deontay Wilder in Las Vega on Sunday, February 23.

Fury has moved ahead of Anthony Joshua and both Deontay Wilder in the heavyweight division after being ranked by The Athletic.

Coming behind Fury is the immediate WBC champion Wilder who lost his first career fight as a professional boxer to Fury.