- The singer shared a video of them on her Instagram stories

The daughter of Nigerian billionaire, DJ Cuppy, is taking her friendship with Nigerian-born British boxer Anthony Joshua a notch higher. DJ Cuppy is ensuring that his friend can speak his native language, Yoruba.

The Gelato crooner took to her Instagram stories to share a video of them having fun together while using the opportunity to educate the boxer.

In the video, DJ Cuppy was heard calling the boxer by his native name, ‘Oluwafemi’ and he happily responded by saying, ‘how far, what is happening?’ 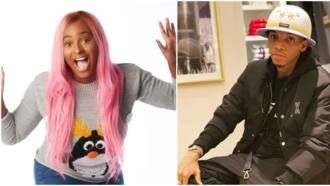 The singer went on to ask him in Yoruba if he is through in Lagos but the boxer told her that she was too fast.

“Slow down,” he said as they burst out laughing.

In another post on DJ Cuppy’s Instagram stories, she shared a photo of them together and tagged it friendship goals.

Legit.ng earlier reported that the heavyweight champion arrived Nigeria and took a tour to his hometown in Sagamu, Ogun state. Anthony Joshua visited the palace of Elepe of Epe and Akarigbo of Remoland and took photos with the monarch.

In other news, Legit.ng earlier reported that DJ Cuppy lamented her single status in the year 2020. The singer took to her social media page to talk to her fans and followers about her love life. Cuppy shared a photo showing a funny face. The beautiful woman said she does not understand how she was still single in the new year.

In a bid to get rid of her single status, the beautiful young woman shot her shot at a popular British singer, Momodou Lamin Jallow, known professionally as Jhus. Jhus said he was searching for a wife and urged young women to send their CVs to him. Responding to his tweet, DJ Cuppy said she would marry him if he agreed to be on her EP.