Oshiomhole wants to destabilize my administration, Obaseki cries out to Buhari 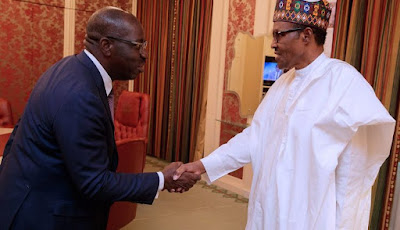 Edo State Governor, Mr. Godwin Obaseki, has cried out to President Mohammadu Buhari, that National Chairman of the All Progressives Congress, Comrade Adams Oshiomhole and members of the Edò Peoples Movement want to destabilise his administration.

Governor Obaseki said the plot was to sponsor protest across the state targeted at maligning and undermining the state government.

Obaseki said the plan was to incite the public and çause disaffection in the state in order to slow down the rapid pace of development which has won the heart of majority of Edo people.

The Governor who spoke in a press statement signed by his Special Adviser on Media and Communication Strategy, Mr. Crusoe Osagie, said Oshiomhole resorted to the final option of stage managing protest and violent attacks with the intention to cause crisis and disaffection among the people.


He said Oshiomhole and the EPM were also exploring other options of public disobedience and disturbances aimed at disrupting public peace and undermining the safety of Edo people.

According to the statement, “This, we believe, is part of Comrade Oshiomhole’s grand plan to make the state seem ungovernable so that he would only achieve his ambition of forcing the Federal Government to declare a state of emergency in Edo but also cause chaos and civil unrest.

“We again call on the Presidency, the Inspector General of Police and the National Security Adviser to rein in Comrade Oshiomhole and stop him from continuing with his insidious intentions so as to safeguard law-abiding residents and indigenes of Edo State.”

Meanwhile, spokesman of Oshiomhole, Mr. Simon Ebegbulem, did not pick calls to his cell phone.

State Secretary of the Edo APC loyal to Oshiomhole, Mr. Lawrence Okah, denied allegations of plots to sponsor protest against the Edo government

Okah said God would see APC through the crisis.

He said, “We carry the egg and we don’t want the egg to be destroyed.”

VIDEO: Sinach – All Things Are Ready

One of Nigeria’s finest gospel singers, Sinach, has released a new visual for her single titled “All Things Are Ready”.The video premiered yesterday, March 30th