- Surprisingly, Wilder fell to the fourth spot behind Dilian Whyte and Anthony Joshua

Tyson Fury has again come atop the pile as he was named best boxer in the heavyweight division following his stunner against Deontay Wilder at Las Vegas.

The Gypsy King totally outboxed the American in the top showdown that went down the lane to become the new WBC champion of the world.

Held at the iconic MGM Grand Garden Arena, Fury recorded an emphatic seventh-round stoppage over Deontay, leaving the American at the mercy of his corner who had to throw the towel. 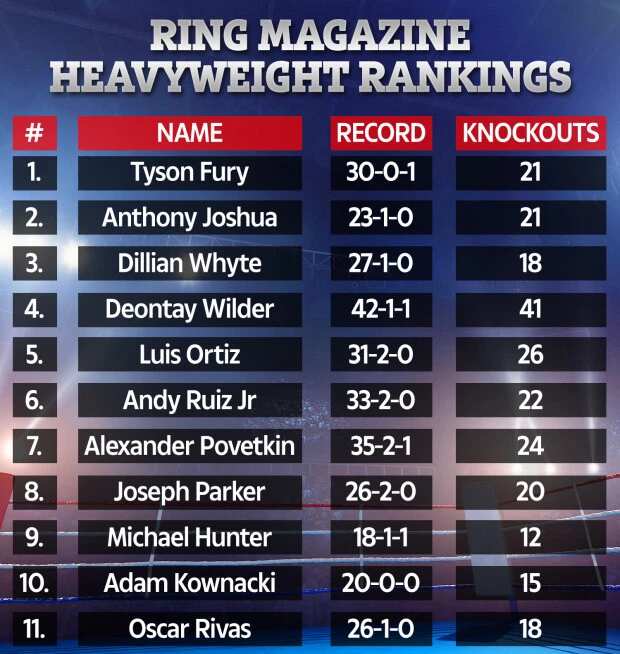 The 31-year-old undefeated heavyweight king has now been ranked number one in the Ring Magazine heavyweight ranking.

Coming behind him is IBF, WBO, IBO champ Anthony Joshua who secured the second place following his victory over Andy Ruiz in Mexico last year.

Surprisingly, Deontay Wilder completely fell down the pecking order after his devastating defeat as the magazine placed him on the fourth spot behind Dilian Whyte.

Oscar Rivas capped the ten-man list with 26 wins and one loss and eighteen knockouts.

Meanwhile, Legit.ng had reported that Tyson Fury was given a heroic welcome by a teeming legion of fans and waiting mob in the United Kingdom as he made a thrilling return home following victory over Deontay Wilder in Las Vegas.

The Gypsy King pulled the storm to enlist one of the greatest historical upsets in boxing by handing Wilder his first career defeat as a professional boxer.

The 31-year-old boxer cruised to a comfortable victory via a 7th-round knockout to become the new heavyweight WBC champion, leaving Wilder at the mercy of his coaching crew who threw in the towel to avert more damage.