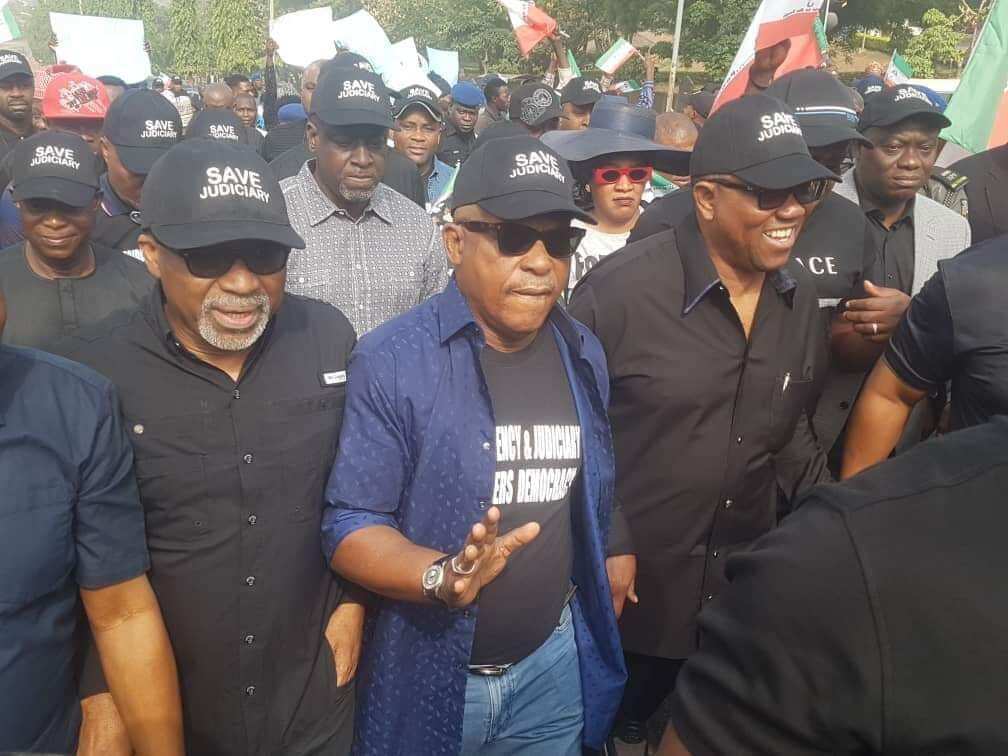 - According to the PDP, its application for the review was to assist the court in correcting its mistake in the Imo judgement

The Peoples Democratic Party has accused the All Progressives Congress of mounting pressure on the Supreme Court not to reverse its verdict on the Imo governorship election petition.

Recall that the Supreme Court had sacked Emeka Ihedioha of the PDP as the governor of Imo state and ordered that Hope Uzodinma of the APC be sworn-in instead.

However, the PDP had approached the Supreme Court, asking for a review and reversal of the judgement.

While the matter is still pending before the apex court, the opposition party in a statement on Wednesday, February 26, by its spokesman Kola Ologbondiyan, said the judgement was flawed and that it contained “obvious mistakes” that capable of threatening the stability of the nation.

The party said its own application for the review was to assist the Supreme Court in correcting the inherent mistakes in the judgment, which it said, came as a result of the misleading presentation to the court by the APC.

It said the APC's call for a review of the Supreme Court’s judgments on the Bayelsa and Zamfara governorship elections was to cause confusion and blackmail the Supreme Court from treating the Imo case on merit.

The opposition party, therefore, urged the Supreme Court not to succumb to the “threats and blackmail” by APC to prevent it from looking at the merit of the Imo case, correcting the mistakes and reversing the “flawed” judgment.

Many Nigerians on Twitter have expressed mixed reactions to the PDP's allegation against the ruling APC.

O'muyiwa, @odubayo822, commented: "This is not funny anymore. It is irresponsible and unpatriotic to want to rubbish this institution just for your political expediency. You were quick to tweet "Congratulations" when Lyon's request for review was dismissed."

"If APC hasn't frustrated the Bayelsa review why would you raised alarm and or cry before the judgement of Imo is passed," Kabiru Usman Misali, @KabiruMisali, tweeted.

Akinbode Olusegun tweeted: "Supreme court handed down fines on the Lawyers of applicantion of Bayelsa review.

"The Apex Court says No court on earth can review its judgement. This is also the verdict of Imo and Zamfara.

"The almighty court said today that they cannot reverse their previous judgement on Bayelsa today and you are happy but now shouting on imo. You can shout from now till 2023 nothing will happen, the gods had spoken."

Tawfiq Ololade wrote: "Please go ahead no party can hold you back but I'm certain the gravel will come down heavily on you."

"Stop wasting time and resources. What happened with Bayelsa review will also be applied on Imo. Go and prepare well for 2023. I rest my case," Leo Kelechi advised.

Joe Akogun also reacted: "I envisage a tough penalties for this yeye party. Make we get rest."

Earlier, Legit.ng reported that the Supreme Court had dismissed the APC's application for the review of its judgment that sacked the party's Bayelsa governorship candidate.

She also described the applications as frivolous and vexatious.