- Coronavirus has reportedly claimed the lives of 210 people in Iran

- Most of the victims are reportedly from the capital, Tehran, and the city of Qom

The deadly Cornavirus has killed at least 210 people in Iran. This was disclosed by sources in the country's health system, BBC reports.

According to the news outlet, most of the victims are from the capital, Tehran, and the city of Qom.

Going further, the report noted that the figure is six times higher than the official death toll of 34 given by the health ministry.

Meanwhile, a member of parliament for Qom accused the authorities of a cover-up.

Recall that Legit.ng had reported that following the detection of the deadly coronavirus in Nigeria, the Ogun state government on Friday, February 28, shutdown a firm in Ewekoro over interaction with the Italian bearer of the disease. 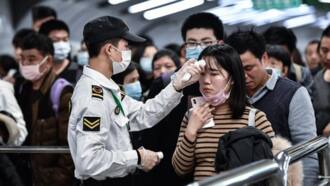 According to Dapo Abiodun, the governor of the state, the company has quarantined the 28 people who had contact with the Italian victim of the disease.

Going further, the governor disclosed that surveillance centres have been reactivated in all the 20 local government areas in the state.

The governor promised that the state is doing everything to prepare for the disease in case of an outbreak.

Legit.ng had also reported that less than one day after an Italian national was detected to have symptoms of coronavirus in Ogun, officials of a cement factory he visited have finally discovered those who had physical contact with him.

Informing the public about the discovery, the spokesperson of the firm, Folashade Ambrose-Medebem, said that although the identities of the persons in question cannot be revealed, they have been quarantined and were examined.

Coronavirus: No Nigerian has been infected - Chinese Ambassador | Legit TV