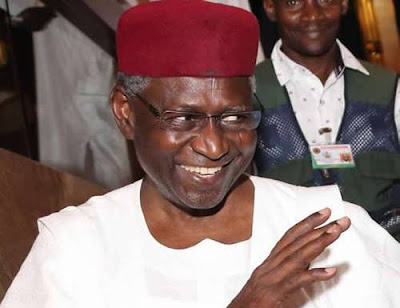 Panic on Tuesday gripped some governors and ministers as the Chief of Staff to the President, Abba Kyari, and the Bauchi State Governor, Bala Mohammed, tested positive for COVID-19.

Kyari, after Nigeria recorded the first coronavirus case on February 27 visited Germany and Egypt. In Germany, he and the Minister of Power, Saleh Mamman, on March 9, met Siemens officials over the power deal signed with the company.

A top government officialsaid there was concern that Kyari and Mohammed could have infected some ministers and governors.

The source stated, “Panic has gripped governors. Kyari went into isolation on Monday, but before that, he had attended the FEC meeting and also travelled to Kogi State to sympathise with the state Governor, Yahaya Bello over the death of his mother.

“Also Bauchi governors attended the NEC meeting on Thursday. There are fears that both of them could have infected their colleagues with the disease.”

Also gripped with fear were those who had visited the Villa in the last one week and met Kyari.

As panic gripped governors and ministers, the Nigeria Centre for Disease Control said on Tuesday COVID-19 cases had increased to 44 from 40 on Monday.

The NCDC, in its twitter handle, said eight confirmed cases had been recorded in Abuja, one in Bauchi State, one in Edo State, one in Ekiti State, 29 in Lagos State and three in Ogun State.

A top source at the Federal Ministry of Health revealed that Kyari, who recently returned from Germany, was among those who tested positive on Tuesday.

He, however, said the President, Major-General Muhammadu Buhari (retd.), had tested negative but the President would be tested again in a few days.

At 65, Kyari is one of the oldest persons in Nigeria with a confirmed case of the novel coronavirus. SaharaReporters had reported on Tuesday that the President’s chief of staff was coughing.

The diagnosis of Kyari with COVID-19 created fears at the Presidential Villa and among governors, who attended the National Executive Council meeting with him on Thursday last week.

It was learnt that some very top officials at the Presidential Villa had gone on self-isolation to play safe over coronavirus.

Among them are Vice-President Yemi Osinbajo and the Senior Special Assistant to the President on Media and Publicity, Mr Garba Shehu.

Also on self-isolation are senior directors and close aides to the Chief of Staff to the President.

Findings indicated that Osinbajo did not report to office on Tuesday. On Monday, he was billed to inaugurate a digital radio system owned by the Federal Road Safety Commission, but the event was put off abruptly.

The Vice-President reported late to work past noon on Monday, unlike before when he came very early in the morning.

The developments came after reports indicated on Tuesday that Kyari tested positive for coronavirus earlier on Monday.

The Chief of Staff had attended last Wednesday’s Federal Executive Council meeting and had contact with many top officials of government, including the President, Major General Muhammadu Buhari (retd.); Osinbajo; the Secretary to the Government of the Federation, Mr Boss Mustapha; and the Head of Service of the Federation, Mrs Folasade Yemi-Esan.

Osinbajo’s media aide, Mr Laolu Akande confirmed on his twitter handle, @akandeoj, the fact that Osinbajo was on self-isolation.

He tweeted, “VP Osinbajo yesterday (Monday) at the office conducted his meetings via video conferencing, while observing social distancing. Today (Tuesday), he continues his work from the home office, as he is in self-isolation in accordance with Nigerian Centre for Disease Control protocols.”

“The task force will make that announcement. That is the agreement taken after discussions across several layers of government. But, it is true that Osinbajo is on self-isolation,” the official added.

The Technical Assistant to the VP (New Media), Mr Philip Obin, later tweeted that the VP held a meeting via video conferencing on Tuesday.

Using his twitter handle, @PhillipObin, he wrote, “#COVID-19compliant @ProfOsinbajo just concluded a meeting via video conferencing, as he continues to discharge his official duties as the Vice President, Federal Republic of Nigeria.”

The tweet was accompanied by three pictures taken at the said meeting. In one, the VP is seen wearing a medical mask and clutching his ipad. In the second photo and third photos, he is shown sitting at a round table with other participants and his aides.

However, there are two empty chairs both rows in between Osinbajo and the others.

The tweet was to convey the message that the VP was still working, though in self-isolation. Around the VP’s office, the majority of aides were seen wearing face masks.

The development came as members of the PTF on COVID -19 made a dramatic visit to the State House on Tuesday. The members were led by the Chairman, Mr Boss Mustapha. Mustapha is the Secretary to the Government of the Federation.

The members declined to state their mission, but it was observed that they filed straight to a floor accommodating the office of Kyari. They made a brief inspection, discussed for about 15 minutes and left in two white Coaster buses.

Mustapha merely told reporters, “We are going to brief the media later.” The members drove off without making further comments.

Aside from the SGF, other members of the PTF on COVID-19 sighted at the Villa were Minister of Health, Prof Osagie Ehanire; Minister of Aviation, Hadi Sirika; Minister of Interior, Ogbeni Rauf Aregbesola; Minister of Information and Culture, Mr Lai Mohammed; Minister of Foreign Affairs, Mr Geoffrey Onyeama; Minister of Humanitarian Affairs and Disaster Management, Mrs Sadiya Umar-Farouk; and the Minister of State Health, Senator Olorunnimbe Mamora.

Meanwhile, Buhari and his Katsina home State Governor, Mr Aminu Masari, held a meeting at the State House on Tuesday.

The agenda of the meeting was unknown, but Masari left the State House about 12.47pm after meeting with Buhari. He declined to speak with State House correspondents.

The agenda of their meeting was expected to focus on security. They did not speak with reporters.

On Tuesday evening, three aides of the Chief of Staff to the President, Mr Abba Kyari, reportedly tested positive for coronavirus.