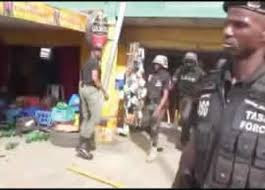 Policemen attached to the Lagos State Task Force on Environmental and Special Offences Enforcement Unit are in the eye of the storm after forcibly shutting down shops that defied the state government’s directive.

The operatives in a video are seen destroying goods at a bar and a phone accessory store at an unspecified location in the state.

The state government had directed markets and stores not trading in essentials to shut down to curtail the spread of coronavirus pandemic.

Public gatherings have also been reduced to 25 at most, while policemen and other relevant agencies were charged to enforce the directives. Lagos has recorded 44 cases as of Friday.

While some of them pulled down crates of bottles at the bar, others destroyed accessories displayed on the door.

The team leader, wearing a vest with the inscription ‘Tango-1, Task Force,’ smashed a glass containing some items at the accessory shop.

In the background, the policemen ordered three men believed to have visited the bar to lie on the floor.

The action of the operatives has attracted criticism, with people condemning the mode of enforcing the ban order.

“Criminal damage (Task force) vs disobedience and breaking of the law (shop owners). Did government say they should destroy or damage properties or prevent and discourage disobedience through effective implementation of the law; but no lawlessness?” One LailaStMatthew Daniel wrote on Twitter.

Another user, with the handle @zaeiny, said the officers went overboard and lacked civility. “How exactly are these people recruited into task force? They look for every opportunity to act like thugs,” Zaeiny added.

“Rogue officers. How does destruction of valuables translate to fight against Covid-19?” One Hardewuzy wrote on Instagram.

An activist, Segun Awosanya, popularly known as @segalink, said with the act, task force has shown gross impunity and disdain for human rights. “These rogues must be punished,” he added.

When contacted, the task force Chairman, CSP Olayinka Egbeyemi, directed our correspondent to the state’s Commissioner for Information, Mr Gbenga Omotoso, for comment.

Omotosho in an interview with one of our correspondents condemned the action, calling for an urgent apology to the affected shop owners.

He said, “I have seen the video and they are members of the Lagos Task Force. Personally, I have said the action was not good. It is condemnable and we are discussing with our people to be more civil in enforcing these orders. Personally, I am recommending that they should apologise to those people.”

He said, “The Commissioner of Police Lagos State Command, CP Hakeem Odumosu, is saddened with the apparent unprofessional conduct exhibited by some police officers identified in a trending video and has ordered their immediate arrest and investigation.

“They are currently subjected to internal disciplinary proceedings known as orderly room trial at the Provost Department, State Command Headquarters, Ikeja, to serve as a deterrent to others. Their conduct is totally condemned as it fell short of our professional standards and rules of engagement. Police officers involved in the enforcement of restriction orders across the state are further warned to exercise their discretionary powers with utmost professionalism, compassion and respect for the rights of the citizens.”