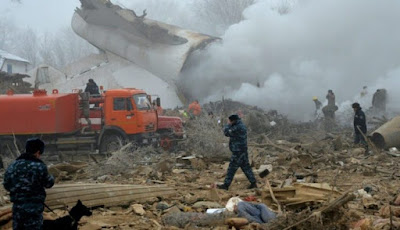 A plane believed to be carrying coronavirus medical supplies has crashed during takeoff.

The aircraft, bound for Haneda, Japan, crashed at Manila International Airport in the Philippines, killing all the eight people on board, on Sunday.

It had purportedly been chartered by the government and was carrying emergency supplies to the country as it battles against the spread of coronavirus.

Tape from the crash scene showed huge flames as emergency services scrambled. Pictures later emerged of the burnt-out wreckage after firefighters got the blaze under control.


The aircraft is reportedly owned by Lion Air, a charter service company in the Philippines.

Cases of coronavirus in Japan, where the plane was destined, have spiked in the last few days as the government held off placing the country on lockdown.

Tokyo governor, Yuriko Koike, had warned that the capital was entering “an important phase in preventing an explosive rise in the number of infections.”

He asked the 14 million people living in the city to stay at home over the weekend.

Japan’s Prime Minister, Shinzo Abe, also warned the country was getting closer to a national emergency.

He promised an unprecedented package to protect the world’s third-biggest economy from collapse.

The federal government has suspended further evacuation of Nigerians stranded abroad over the COVID-19 pandemic. Geoffrey Onyeama, minister of foreign affairs, who announced this during the presidential task