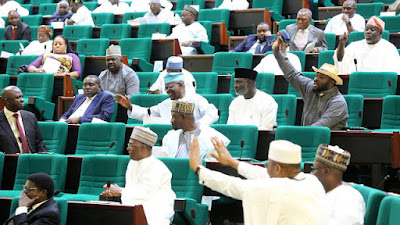 The House of Representatives had announced that its 360 members have agreed to donate their salaries for the next two months towards the fight against the dreaded COVID- 19.

Speaker Femi Gbajabiamila, who made the announcement in a message to Nigerians, said the contribution by the lawmakers will support provisions for welfare of frontline medical professionals and health workers during this trying times.

The Speaker said the Clerk to the National Assembly has been directed to see to it that “all members salaries are transfered to the National Relief Fund for this month and next month”.

He said the donation was independent of ongoing individual efforts by members to assist in alleviating the suffering occasioned by the virus and to improve the living condition not citizens in their constituencies.


According to a statement issued by his media office on Tuesday, which accompanied his video message to Nigerians, the Speaker said starting from March salary, the lawmakers’ donation would be transferred directly to the National Relief Fund account for the fight against the pandemic.

He said, “We have in the House of Representatives jointly committed to contributing 100 per cent of our salaries for the next two months to the fight against COVID-19 in Nigeria. Our contribution will support provisions for the welfare of frontline medical professionals and health workers and other interventions, to provide for the wellbeing of all Nigerians through these trying times.

“Accordingly, I have directed the Clerk to the National Assembly to see to it that all members’ salaries are transferred to the National Relief Fund for this month and the next. This is independent of ongoing individual efforts by members to alleviate the suffering brought on by this virus and to improve the living conditions of citizens in their various constituencies.

The Speaker added that the House would exercise its oversight power to ensure faithful administration of all emergency funds and contributions made so far, to ensure they serve the purpose for which they were intended.

He said consequently, the House had already mandated the Committees on Health and Disaster Preparedness to “diligently oversee the distribution of items donated by local and foreign donors to ensure proper management.”

Gbajabiamila also said the House has urged the Central Bank of Nigeria to make cash grants to the 774 local government areas of the country to alleviate the suffering by the masses.

He said, “The House also calls on the CBN, as part of its policy measures in response to the COVID-19 outbreak, to immediately direct cash grants to the 774 LGA administrations in the country to provide food and other essentials to at-risk individuals and communities.”