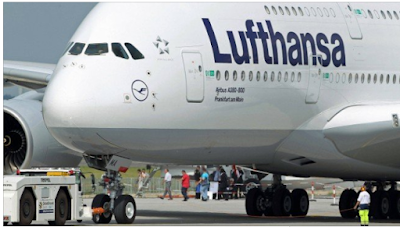 At least 637 Europeans were evacuated from Nigeria and Benin Republic on Thursday, according to PUNCH.

German airline, Lufthansa and Air France, were reportedly used to transport some of the Europeans from Murtala Muhammed International Airport, Lagos.

In a tweet on Monday, the Swedish Embassy in Nigeria had announced that the European Union would evacuate its citizens from Nigeria, starting April 2.

“To Swedish residents in Nigeria. Opportunity for EU citizens to be placed on a waiting list for flights from Lagos to Munich, April 2; Abuja to Vienna, April 3. Wishes are sent immediately to the embassy.abuja@gov.se. Note special medical conditions.” it tweeted.


A total of 238 Germans were reportedly evacuated by Lufthansa, while 399 French and Dutch citizens boarded the Air France flight.

Out of the 399 French and Dutch citizens that were evacuated, 142 were said to have been airlifted from Cotonou, Benin Republic, while 257 others joined the flight at the Lagos airport.

The first evacuation was said to have taken place on March 26, while the next evacuation is expected to take place on April 9.

As part of the measures to limit the spread of coronavirus, the federal government had restricted flights from countries considered as “high risk”.

Photo of Runtown and AdutSuperstar singer, Runtown, and South Sudanese-Australian model Adut Akech Bior are probably up to something as both of them were seen openly