- A social media user, Oluwafemi Bankole, has now claimed that the actress is suffering now for not attending her father’s burial

Much-loved Nollywood actress, Funke Akindele, was recently subjected to backlash and ridicule on social media as she got on the wrong side of the law due to a misdemeanour.

The actress and her husband, Abdulrasheed Bello, had hosted a birthday house party at their residence in Amen estate and video clips from the occasion made the rounds on social media.

This led to a major outcry for the couple and other party goers to be arrested. They were eventually picked up by the police and arraigned.

Their sentence included 14 days community service as well as payment of N100,000 fine each.

The whole situation has led to series of reactions on social media with many people sympathising with the actress and others saying it serves her right.

Well, a man has now taken a look at the actress’ travails from another angle. According to one Oluwafemi Bankole, the issue might actually be spiritual.

He said that perhaps the actress is suffering now because she did not attend her father’s burial but chose to travel to Dubai with friends instead.

Bankole also said the actress should better go to her father’s burial ground to ask for forgiveness.

He wrote: “I believe by now she will know that life is personal not everybody around you want good for you. a lesson to everyone… someone said it might be spiritual because she refused to attend her father’s burial, instead she went to Dubai to party with friends, if so she better go and seek forgiveness from her father’s burial ground”

The police, journalists and lawyers are all jokers - Paul Okoye reacts to Funke Akindele’s arraignment

See a screenshot below: 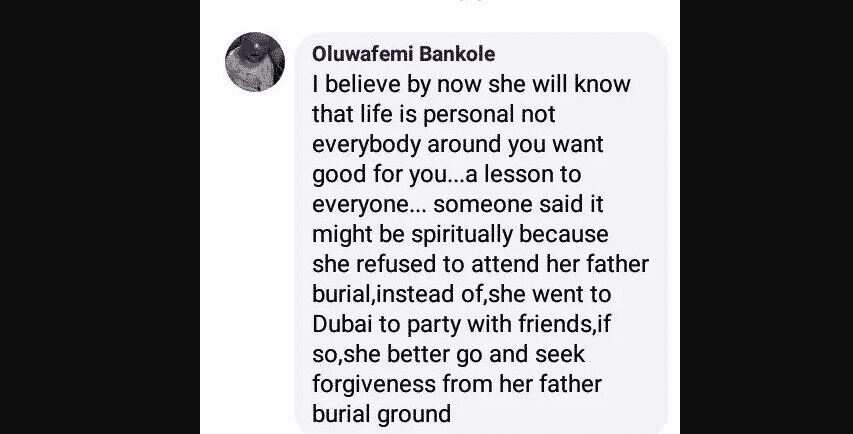 In other related news, Legit.ng reported that Nollywood actor, Seun Sean Jimoh, also reacted to Funke Akindele's arraignment. According to him, Nigerians, including the government, are hypocrites who enjoy seeing the downfall of others.

Jimoh also said that Nigerians do not practice what they preach because he is sure that nobody has adhered 100% to the social distance order.