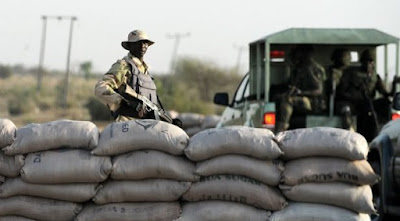 There was tension in Abuja on Wednesday as soldiers deployed to enforce the President’s lockdown order unleashed terror on residents.

The soldiers, who took over the boundary of the Federal Capital Territory with Nasarawa State, blocked the entry and exit routes, leaving commuters stranded.


A few of the soldiers wielding guns, rods and horsewhips chased a middle-aged worker.

One of the soldiers, in a moment of rage, threw a rod at the fleeing worker but missed him, forcing other residents to scamper for safety.

This was as one of the soldiers ordered a man and a lady to squat down by the road.

The soldiers rejected all means of identification and the Exemption Pass issued by the Federal Capital Territory Administration to essential workers.

The President, Major General Muhammadu Buhari (retd.), had, while declaring the 14-day lockdown, said essential workers, including health workers and journalists, were not affected by the stay-at-home order.

A man, who introduced himself as a medical doctor in Garki hospital, was rebuffed and asked to leave as he tried to convince the soldiers.

Our source who was at the checkpoint on his way to the capital city, was also turned back despite identifying himself as a journalist and showing them his Exemption Pass.

Two of the soldiers threatened to deal with him, if he refused to turn back and return to his house.

“You are a journalist, and so? The government has said no entry. Call the man that gave you the pass to come here,” one of the soldiers said in reference to the pass issued by the FCT Police Command.