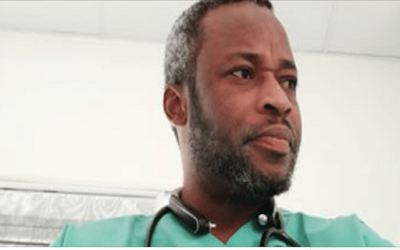 James King, a medical doctor, says the COVID-19 index case in Kano lied about his health and travel history when he was brought to their hospital.

Kano recorded its first case on Saturday, and the patient was said to be a former diplomat who had developed symptoms of the disease.

The state also recorded its first COVID-19 death on Wednesday.

In a Facebook post on Thursday, King said the patient, who was brought in last Friday, had told them he had no symptoms of the disease and he was then admitted in their facility.


He also accused the patient of holding back the information on his travels.

“And importantly, he did not provide information that his samples were taken by NCDC for COVID-19 testing before coming to us,” the doctor explained.

“Of course he denied all the above in order for him to have our medical care. Putting us all and many others at high risk of the novel pandemic.We also learnt that during his illness before coming to us, he was attending Friday Mosque prayers, naming ceremonies and other gatherings.

“While on admission in our facility, a day after admission being a Saturday, we had a Nollywood-like dramatic entrance into our facility by health officials with massive police presence.

“The major road around our hospital was blocked and made a security restricted area.

“I applaud the state government. Their action was very swift and timely. The officials told us that we had a man in our facility that just tested positive for COVID-19. Luckily, my boss, a renowned neurosurgeon, who was still in theatre while rounding up a delicate Spinal Cord Pedicle Screw Fixation + Laminectomy surgery had to be told. He derobed. And met the officials.

“There was an order from the Governor of the state to lock down the hospital immediately to prevent further spread.”

He said the patient was whisked away to a quarantine centre on the outskirt of the state, while they were placed in isolation within their hospital facility.

He added that samples were collected from the hospital staff for COVID-19 test, and after days of waiting, the result returned negative.

As of Wednesday, the Nigeria Centre for Disease Control (NCDC) put the total cases in Kano at 16 but the state’s ministry of health put the total figure at 21.