- Borussia Park had interesting scenes on Saturday, Maya 23 as the club printed cardboard cutouts to act as fans

German outfit Borussia Monchengladbach went to extreme lengths to ensure their game against Bayer Leverkusen felt as natural as possibly by having thousands of fan cut-out plastered across seats in the stands.

Amid the coronavirus pandemic, the Bundesliga worked its way round the virus to eventually resume top flight football, albeit without fans in stadiums.

There is obviously no getting used to playing football without the very fans who make it worth the 90 minutes and as former Barcelona manager Luis Enrique brilliantly put it, it was “sadder than dancing with your sister”.

For Gladbach, the club decided to take matters into its own hands at the Borussia-Park, as the stadium was filled with thousands of life-sized cutouts which eerily resembled real fans.

It marked the first home game back for Marco Rose’s side, and despite the efforts to give his side a home advantage, they lost 3-1 to visitors Bayer Leverkusen.

Perhaps the team misplaced priorities a bit and focused more on the atmosphere than the actual football match.

Interestingly, however, it is Monchengladbach fans who endorsed the cardboard move themselves as season ticket holders paid up to KSh 2200 (£17) to have life-sized version of themselves placed on the stands. 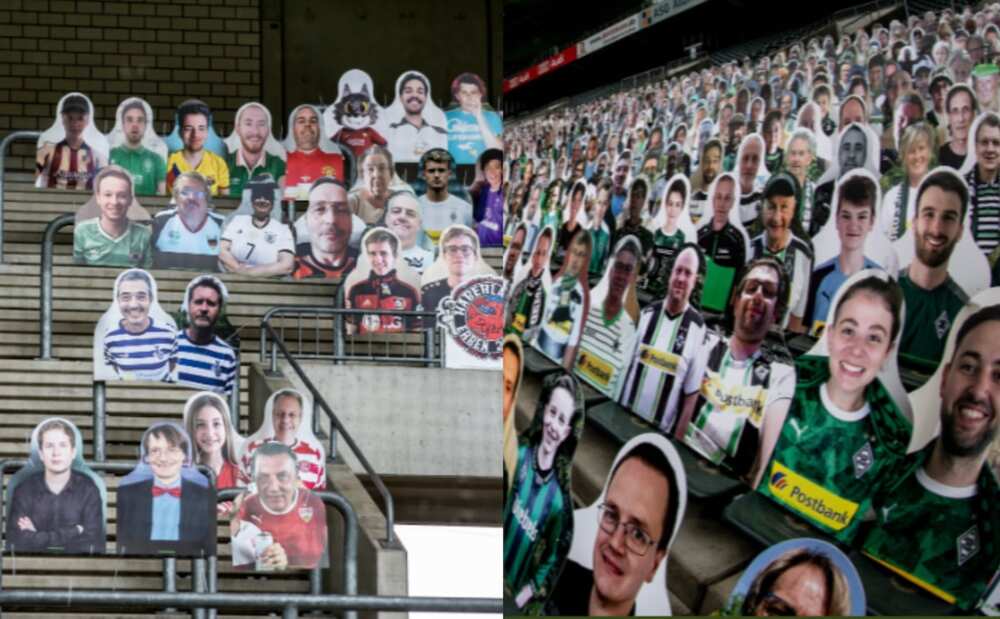 Ease of lockdown: Stay indoors we are not outside please fam - Davido pleads with fans

In other words, the cardboard actually had faces of real fans and that in itself is a commendable effort.

According to Sporting director Max Eberl, the move was supposed to be a “monument” to show football is not the same without fans.

“They’re supposed to show that football without fans just isn’t the same. It’s a great campaign which provides a lot of atmosphere in the stadium.” He said.

Earlier, Legit.ng had reported how German Bundesliga giants Bayern Munich reportedly showed interest in the signing of Borrusia Dortmund winger Jadon Sancho and they are ready to move for him this summer.

This latest development will now come as a big blow for Premier League side Manchester United who have long been tracking how to sign Jadon Sancho.