So cute: Heartwarming moment dog siblings hug after recognising each other on the street (video)

- When the two pups saw each other, they ran into each other's arms and it was later discovered the cockapoos belonged to the same litter

You know that warm, fuzzy feeling you get in your chest when you finally see your sibling after being apart for months, days or years? Dogs get it too.

Initially, people thought pooches separated while young often cannot recognize each other when they meet but that could not be any further from the truth.

Researchers said dogs who stay together for around four months have a huge ability to recall one another when they meet after being separated.

A dog owner named Dave who was walking his little pet on the street was surprised when his sweet animal ran into the arms of another dog which turned out to be its sibling.

The dark coloured pooch spotted a white one that looked exactly like him and got excited immediately.

The two pets embraced each other and it was later discovered they were siblings from the same litter.

“So Dave was out walking his dog, and there was a couple walking towards him with a white version of his dog. Turns out they are brother and sister from the same litter,” Twitter user Libpincher shared.

He then posted a photo of the two dogs hugging each other tightly as they wagged their tails in excitement.

The two owners of the cockapoos had no idea their dogs were related in the beginning.

In other news, talent manager Soso Soberekon has expressed dissatisfaction after learning that a couple he bought their aso ebi of N65,000 in December have gone their separate ways. 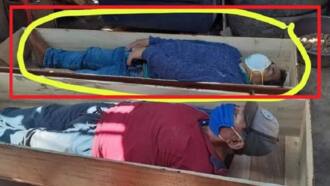 This mayor went drinking with friends during lockdown, he then laid in a coffin to evade police, yet he is caught (photo)

Soso took to his Instagram page to make the disclosure, saying henceforth, he would be signing an agreement with anyone who brings aso ebi of over N1,500.

According to him, any couple who divorce after buying their aso ebi of over N1,500 will refund his money with interest.