Evangelist calls out Pastor Adeboye’s son Leke for dressing like a gangster, says he should be cautioned (photo)

The evangelist says he was shocked when he saw the picture, asking why a pastor would be dressing like that

An evangelist identified as Victor Edet on Facebook has asked that Pastor Enoch Adeboye's last born, Leke Adeboye, be cautioned for dressing like a gangster.

Evangelist Edet shared a picture of Leke on his Facebook page in which the young pastor could be seen wearing a face cap which was facing back.

The evangelist said he was shocked and short of words after seeing the picture, asking why a pastor would be dressed in such a way. 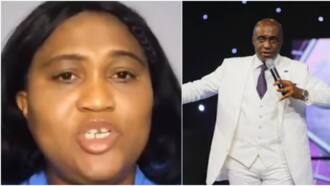 In video: Your ignorance is so loud - UK-based doctor slams popular pastor for saying COVID-19 does not exist (video)

Adeboye's son gave the advice based on his thoughts on the Marlian movement. Marlians are fans of Nigerian singer Azeez Fashola, popularly known as Naira Marley.

In the post, the young man advised that no one could be a Christian and a Marlian at the same time.

In other news, a couple were forced to reduce the number of their wedding guest from a whopping 2,500 guests to a sprinkle of 15.

The newlyweds wanted to enter into nuptial bliss while still complying with COVID-19 regulations in their country.

Kenyan couple Justus and Grace Ngari had tough decisions to make as they cut down their massive wedding to a tiny affair.

The groom, who resides in Durban, said they had planned an extravagant event. Justus said: "The bridal team would have comprised of eight guys and eight ladies, but we reduced them to have only the best man and maid of honour." The wedding took place early this month but was originally planned for April. The pair had to weigh their options amid the coronavirus pandemic.

Kenyan government offices were closed in April and they could only get permission to proceed in May. The couple got creative and decided to stream the event for the 2,000-plus who didn't make the cut.